The number of confirmed Ebola cases passed the 10,000 mark over the weekend, despite efforts to curb its spread. 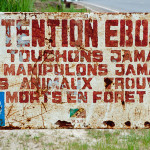 And while the disease typically dies on surfaces within hours, research has discovered it can survive for more than seven weeks under certain conditions.

During tests, the UK’s Defence Science and Technology Laboratory (DSTL) found that the Zaire strain will live on samples stored on glass at low temperatures for as long as 50 days.

The tests were initially carried out by researchers from DSTL before the current outbreak, in 2010, but the strain investigated is one of five that is still infecting people globally.

The findings are also quoted in advice from the Public Agency of Health in Canada.

Ebola was discovered in 1976 and is a member of the Filoviridae family.

This family includes the Zaire ebolavirus (Zebov), which was first identified in 1976 and is the most virulent; Sudan ebolavirus, (Sebov); Tai Forest ebolavirus; Ebola-Reston (Rebov), and Bundibugyo ebolavirus (Bebov) – the most recent species, discovered in 2008.

For their 2010 paper, ‘The survival of filoviruses in liquids, on solid substrates and in a dynamic aerosol’, Sophie Smither and her colleagues tested two particular filoviruses on a variety of surfaces.

These were the Lake Victoria marburgvirus (Marv), and Zebov.

Each was placed into guinea pig tissue samples and tested for their ability to survive in different liquids, and on different surfaces at different temperatures, over a 50-day period.

When stored at 4° (39°F), by day 26, viruses from three of the samples were successfully extracted; Zebov on the glass sample, and Marv on both glass and plastic.

By day 50, the only sample from which the virus could be recovered was the Zebov from tissue on glass.

‘This study has demonstrated that ?loviruses are able to survive and remain infectious, for extended periods when suspended within liquid and dried onto surfaces,’ explained the researchers.

‘Data from this study extend the knowledge on the survival of filoviruses under different conditions and provide a basis with which to inform risk assessments and manage exposure.’

The researchers do stress that these tests were carried out in a controlled lab environment, and not in the real world, but published their findings to highlight the survival rates.

Last week the Centers for Disease Control and Prevention (CDC) updated its Ebola guidelines following the rise in infections.

The centre explained that Ebola is not spread through the air, water, or food and a person infected with Ebola can’t spread the disease until symptoms appear.

The time from exposure to when signs or symptoms of the disease appear, known as the incubation period, is two to 21 days, but the average time is eight to 10 days.

Dr Tom Fletcher of the Royal Army Medical Corps, who has treated victims in Guinea and Sierra Leone, says: ‘The initial symptoms are quite non-specific and similar to a flu-like illness.

‘They include fever, headache and lethargy. This progresses to severe diarrhoea and vomiting.’

Officials have emphasised there is no risk of transmission from people who have been exposed to the virus, but are not yet showing symptoms.

But, specialists at Emory University Hospital in Atlanta found that the virus is present on a patient’s skin after symptoms develop, underlining how contagious the disease is once symptoms set in.

According to the CDC, the virus can survive for a few hours on dry surfaces like doorknobs and countertops and can survive for several days in puddles or other collections of body fluid.

However, bleach solutions, including household bleach, can kill it.

There is no FDA-approved vaccine available for Ebola, but experimental vaccines and treatments for Ebola are under development.

The CDC advises people wash their hands with soap and water or use an alcohol-based hand sanitiser, to protect themselves.

It warns to not touch the blood or body fluids, including urine, faeces, saliva, vomit, sweat, and semen of people who are sick.

Ebola was once thought to originated in gorillas, because human outbreaks began after people ate gorilla meat.

But scientists now believe that bats are the natural reservoir for the virus, and that apes and humans catch it from eating food that bats have drooled or defecated on, or by coming in contact with surfaces covered in infected bat droppings and then touching their eyes or mouths.

The current outbreak seems to have started in a village near Guéckédou, Guinea, where bat hunting is common, according to Doctors Without Borders.

In Case You Missed It:  Implementing the Great Reset: Why is monkeypox only circulating in countries where Pfizer’s covid injection was distributed?
Posted in Freedoms and tagged Ebola, Health And Human Services, US Citizen.

USA Today Washington Bureau Chief Susan Page offered some of the sharpest criticism yet of the Obama administration's violation of...