This is what the Islamization of a Western country looks like. Good luck with your integration and your moderate Islam. All the empty words in the world can’t change the fact that what’s happening in Iraq and Syria will be coming to the UK… sooner than you think. 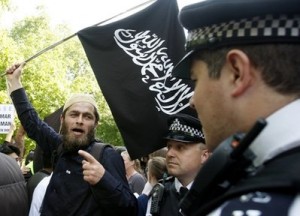 One in seven young British adults has “warm feelings” towards Islamic State, according to a poll.

A tenth of Londoners and one in 12 Scots view Islamic State (Isis) favourably, but sympathy for the militant group reaches its highest levels among the under-25s, the Populus survey found.

There are about 1 million Muslim settlers in London where they make up 12 percent of the population. These figures suggest that the vast majority of them, perhaps as high as 80 percent , support ISIS.

There’s a lot of nonsense about skepticism among young people, but this isn’t about young people. It’s about Muslims.

By contrast, the number of people under 25 who describe themselves as Muslim has doubled over the past ten years: one in ten under the age of 25 are Muslim, up from one in 20 in 2001.

These numbers suggest that most or virtually all young Muslim settlers in the UK support ISIS.

In Case You Missed It:  Study: Over Half of Migrants and Refugees Are on American Taxpayer-Funded Welfare
Posted in Terrorism and tagged Europe, Immigration, ISIS, Jihad, Muslim, Muslims, Terrorism, UK Muslims, United Kingdom.

We Must Not Even Think of Accusing Leonardo DiCaprio of Hypocrisy

(Breitbart) Friday’s crash of the Virgin Galactic space-plane in California was, of course, a tragedy. One test-pilot was killed and...