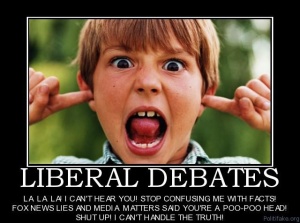 Anyone who regularly uses common sense knows that liberals are almost always wrong.  Wrong in their opinions, wrong in their justifications, wrong in their worldview.  There is not an area in our social or political discourse in which liberals don’t regularly say or do things that simply make no sense to people who expect rational behavior on the part of others.  More often than not, normal people find themselves looking at liberals and wondering, “What were they thinking???”

Now, it’s alright to be wrong.  Everybody gets something wrong every once in a while.  I even get things wrong very occasionally.  But it’s how we get them wrong that makes the difference.  You can be wrong, yet be wrong in a “right” sort of way.  One can be in error about something, yet still demonstrate that one is thinking seriously about a question, or has access to relevant facts and pertinent arguments.  Even Einstein made a few mistakes in his thinking and his arguments.  But I think we can all agree that Einstein nevertheless was on the ball with respect to his areas of specialty.

Yet, one can also be wrong in a “wrong” sort of way.  One can be wrong because you simply refuse to face reality, or because you are trying to construct your own “reality” that ignores relevant details.  One can be wrong because you refuse to acquaint yourself with the facts that disagree with your preferred worldview.  In other words, one can be childishly wrong.  And this is what liberals do so, so many times.  Liberals – especially the self-important “hipster” type who inhabit Slate, Mother Jones, Salon, Buzzfeed, Cracked.com, the HuffingPaint Post, and the rest of the left-wing blogosphere – like to pride themselves on being a “reality-based community,” meaning that they base their opinions on facts and reason, while those crazy old conservatives are just wishcasting numbers with their magic wands.

This is fine, except that they have it exactly backwards.  The Left, especially today’s “young Left” full of self-described bright young things, is not a “reality-based community.”  Instead, they have attempted to construct for themselves a “community-based reality” that pointedly excludes any and all facts, logic, arguments, and results from the real world that would intrude into their self-contained fact space.

An example of this is shown above,

If you are active on social media at all, the chances are very good that you have seen this picture passed around more than once, both by left-wingers (who are, of course, sympathetic) and by conservatives (who are not so much).  What do we see here?  We have an obviously very liberal individual who can’t seem to understand why she (I think) is in such dire straits despite having a magical advanced degree that is supposed to miraculously open doors of opportunity for her to get paid well for spreading around the social justice or whatever.  Yet, she works for probably little more than minimum wage, and even more probably sees a good chunk of that assessed to pay off that $60,000+ in student loans (which, by the way, cannot be discharged in bankruptcy).

Now, most of us look at this, and while we might feel a twinge of pity for her situation, we nevertheless can’t help thinking, “Well, what did you expect?”  I mean, she gets not one, but TWO degrees in a field that has no real world application at all, and which, let’s face it, is going to mark her as a definite potential troublemaker to just about any business or other organization to which she might apply, rendering her virtually unemployable.  On top of this, she took out massive debt to finance this educational fiasco.  Are we surprised that she’s in the situation she’s in?

But more to the point, all of this trouble that she’s in?  It’s not her fault.  It’s YOUR fault.  It’s the system’s fault.  It’s capitalism’s fault.  It’s the fault of rich people, that fabled “1%” who systematically oppress poor, miseducated bartenders with unrepayable student loans.  And this is what I’m talking about.  This sort of an approach to the real world is childish, it’s immature.  It’s remarkably like the mindset sometimes displayed by my own son, who will do something without thinking ahead, hurt himself, and then try to blame it on the dog.  Except that my son is five years old.  He’s supposed to act like that.  Adults aren’t.

This sort of immaturity is rife in liberalism.  Take, for example, the Left’s approach to “women’s issues.”  The Left has made a lot of hay with their “War on Women” meme, which was successful in 2012, but not so much now because the normal people are getting tired of hearing about it.  We are told by the Left that if someone opposes abortion, or is against RU-486 or other abortiofacients (which the Left misleadingly lumps under the term “contraception,” even though they are not), then that person wants to “control women’s sexuality,” almost like we want to install morality police in women’s bedrooms to stop them from having sex or something.

But, wait – what does opposition to abortion and abortifacients really entail?  Essentially, it means that women (and by that term, we’re really talking about “young, unmarried liberal women”) would have to take responsibility for themselves.  In other words, they would have to accept that actions have consequences.  By opposing abortion, nobody is telling them that they can’t engage in sex outside of marriage.  But what we ARE essentially telling is that if they do, they need to take responsibility for themselves.  You take the chance, but if it catches up with you, you have to deal with it, instead of killing another human being to cover your own mistakes.  And THAT is exactly what the Left does not like – having to be personally responsible.  Asking them to be personally responsible is tantamount to “controlling” them, as ludicrous as that concept may seem to reasonable people.

There’s not a single area or policy question where the left-wing argument and position cannot be shown to be essentially childish and based on wishful thinking and the desire to avoid personal responsibility.  Think about it.

Dealing with criminals?  Criminals aren’t responsible for their actions, “society” made them do it, or they were abused as a child, or something.  Certainly, the criminal can’t be held responsible for his or her own crimes.

Voter ID?  Apparently it’s too hard for people who can scrape up the dough to get a pair of $100 high-top basketball shoes to find the $15 or so (assuming their state doesn’t provide them for free) to get a government-issued photo ID.  (Am I the only one who finds it amazing that all of those millions of people in India who make around $400 a year nevertheless have photo IDs so they can vote in Indian elections?)

Being a nurse who potentially is carrying Ebola, since your roommate in Sierra Leone had it, and you had your fingers inside the mouth of a person dying from the disease?  Don’t you dare tell me I can’t come and go as I please, or that I have to stay away from people upon whom I might sneeze or cough and thus pass aerosolized virus to!  The personal comfort and convenience of Kaci Hickox (who, surprise surprise, is a far-left activist with ties to Obama’s CDC) is apparently more important than the health and welfare of the hundreds of thousands of people in Maine with whom she may well come into contact.

On and on it goes.  All the way up to the Pres__ent himself, who is one of the biggest man-children in the country.  Immaturity.  Self-indulgence.  Irresponsibility.  These are what liberalism is all about.

In Case You Missed It:  New NBC Show Equates Founding Fathers’ Slogans “Don’t Tread on Me” and “Unite or Die” to the Nazis (VIDEO)
Posted in Tyranny and tagged Democrats, Liberalism, United Socialist States of America.

by Daniel Greenfield This is what the Islamization of a Western country looks like. Good luck with your integration and...