I know, that’s a good one, isn’t it? As a conservative, it is impossible to get inside the mind of a liberal. But think about it for a minute. What makes these people tick? What makes a person believe in every kind of cockamamie idea known to man – and profess these ideas as gospel? The even bigger question is this: How can a reasonably well-educated person fall lockstep into an ideology that supports everything from abortion-on-demand to policies that allow every Tom, Dick & Harry to vote without verifying their identity? 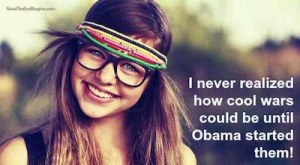 It runs the gamut…pick any topic in the news today: Global warming, for instance. For years, Al Gore and other like-minded individuals – many with little or no scientific background – were preaching that the planet was warming and that the world would come to an end if we did not bankrupt the prosperous nations by placing onerous taxes on their energy production. Who cares if a 60 cent light bulb now costs twelve dollars? It’s all for the good of the planet. Liberals, without exception, decided that this was a good idea. After all, “The science is settled,” as Gore preached. In spite of a preponderance of evidence suggesting that global warming is, at best, the result of flawed reasoning or, at worst, an out-and-out attempt to defraud the world, hardcore liberals still cling to it.

As of October 2014, Ebola is in the national spotlight. No one (not even conservatives) wants to see people die from this dreadful disease. Yet, here we have the Obama administration proposing that we airlift people from the Ebola-ravage countries of Africa – people who are not even US citizens – and bring them to the United States for treatment with little, if any, consideration given to containing the disease. This idea is especially ludicrous given the administration’s incompetence thus far with dealing with the disease here. Who in their right mind would go along with such a scheme? Why, liberals, of course.

Next subject: The minimum wage. Everybody deserves the opportunity to be paid a “living wage”. What could be more humane than to lift people out of poverty as if by magic? What difference should your skill level make? If you’re employed and you have a house full of children, well, you have the God-given right to make enough money from one low-skill job to support those children and live in decent housing with a cell phone, big-screen TV, high-speed internet (don’t forget the laptop), car, etc. No matter how menial the task you perform at work, you should make at least fifteen dollars per hour. Who comes up with this stuff? And who determines exactly how much this “living wage” should be? Why, liberals. Who else? And who falls hook, line, and sinker for this reasoning? Other liberals, of course.

In early 2009, our national debt stood at around eleven trillion dollars; a staggering sum in anyone’s book – except the liberals’ book. Who cares if every man, woman, and child in America owes $50,000+ as part of his or her share of this debt? Why should we stop at eleven trillion? Isn’t twelve or thirteen better? Heck, let’s shoot for seventeen or eighteen. And who has decided that racking up an unimaginable amount of debt is a good idea? Need you ask? The Tea Party sprang into existence in 2009 to try to help stem the tide of red ink. Yet the Tea Party has been derided mercilessly by whom? By the liberals.

The left has perpetuated the notion that the rich do not pay their “fair share” in taxes. Yet it has been proven time and again that those in the upper income ranges pay the vast majority of the taxes while those at the bottom of the income ladder pay little and, in many cases, receive more back than they pay in. Yet liberals will go to their graves thinking that the wealthy, the job creators, are “evil”; they’re greedy. Yet, asking another, through confiscation of income, to pay one’s way in life is NOT to be considered evil. Whose logic is this? Need you ask?

Liberals constantly seek to further their socialistic agenda through obfuscation and downright deception. The Democrats could never have gotten the Affordable Care Act passed in Congress had it not been for, “If you like your plan, you can keep your plan.” That was proven to be a lie almost immediately upon the law’s implementation in 2013 when millions of Americans – who liked their plans – found themselves with no insurance.

Harry Reid shamelessly uses his position as Senate Majority Leader to belittle and besmirch the Koch Brothers for their support of conservative candidates and causes. Yet Reid’s contributions from billionaire liberal Tom Steyer go almost unmentioned.

The list goes on. And the liberal drumbeat goes on right along with it.

How Sweden Saved the Middle East by Recognizing Palestine

by Daniel Greenfield On Thursday, Sweden finally solved all the problems in the Middle East by recognizing the State of...