(Reuters) – Republicans struck powerful first blows in U.S. congressional elections on Tuesday in their drive to control the U.S. Senate and dramatically tip the balance of power away from Barack Obama and his Democrats. 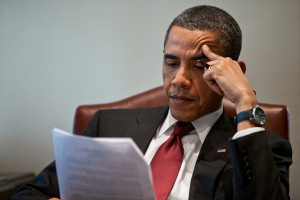 Obama’s low job approval rating, partisan gridlock in Washington and a U.S. economy that is not growing broadly enough to help many in the middle class were major issues confronting voters in elections for 36 senators, 36 state governors and all 435 members of the House of Representatives.

Cotton’s win, along with victories by Republicans Shelley Moore Capito in West Virginia and Mike Rounds in South Dakota, gave Republicans three of the six seats they need to gain control of the Senate.

In another boost for Republicans, Senate Republican leader Mitch McConnell of Kentucky won his re-election battle, fending off Democrat Alison Lundergan Grimes in a race that had been close for months until McConnell pulled away in the polls in recent days.

If Republicans go on to win the Senate, McConnell would replace Democrat Harry Reid as Senate majority leader, putting him in a powerful position on Capitol Hill. In his victory speech, McConnell said “it’s time to turn this country around.”

“Some things don’t change after tonight. I don’t expect the president to wake up tomorrow and view the world any differently than he did when he woke up this morning. He knows I won’t either. But we do have an obligation to work together on issues where we can agree,” he said.

Television networks projected the House will remain under the control of Republicans, who are expected to add to their 233-199 majority in the chamber.

If Republicans do win a net gain of six Senate seats they would control the 100-member chamber for the first time since the 2006 election, and have a majority in both chambers of Congress.

That would constitute the most dramatic political shift since Obama entered the White House in early 2009 and might force the president to make more concessions to his Republican opponents than he would prefer.

Showing his willingness to reach out to Republicans, Obama has invited Republican and Democratic leaders from both houses of Congress to a meeting at the White House on Friday.

In a key win for Democrats, Jeanne Shaheen won re-election in New Hampshire in what polls had forecast as a tight race, ABC projected.

A barometer for Democrats was whether they would be able to hold North Carolina, where incumbent Democratic Senator Kay Hagan had an early lead in her closely fought battle against Republican challenger Thom Tillis.

Obama, whose 40 percent approval rating made him unwelcome on the campaign trail for many fellow Democrats, cast the race as critical in a radio interview with Charlotte, North Carolina, station, the Artie and Fly Ty show.

In Virginia, heavily favored Democratic incumbent Senator Mark Warner was in a surprisingly close fight against Republican challenger Ed Gillespie, with much of the vote counted. Republican David Perdue had an early lead over Democrat Michelle Nunn in Georgia.

The battle for control of the Senate could extend beyond Tuesday night. Senate races with multiple candidates in Louisiana and Georgia, where the winner must get more than 50 percent of the vote, could be forced into runoffs in December and January, respectively.

‘SHAKE THINGS UP IN WASHINGTON’

In Raleigh, North Carolina, Edward Sanders, 59, said the economy was his top issue. After voting for Hagan for the Senate in 2008, Sanders said he decided this time to go with her challenger, Tillis.

“I don’t particularly like Tillis, but he seemed more likely to shake things up in Washington,” said Sanders, a mechanical engineer.

The White House tried to play down the prospect of sharp changes in strategy after the election, saying Obama would seek common ground with Congress on areas like trade and infrastructure.

On other issues, like climate change and immigration reform, Obama is likely to continue to take actions on his own. By the end of the year, he is expected to announce executive action to defer deportations for some undocumented immigrants.

Jay Carney, Obama’s former spokesman, said he expects Obama to make an “all-out push” on his priorities regardless of the makeup of Congress.

Obama spent Election Day in meetings with advisers and planned to watch election returns at the White House on Tuesday night.

White House spokesman Josh Earnest said the election was not a referendum on Obama’s policies. “The vast majority of voters across the country are making decisions in this election based on the candidates themselves, and not on President Obama,” he said, citing polling data.

Whatever the case, Obama will face pressure to make changes at the White House if his party loses the Senate. A Reuters/Ipsos poll showed 75 percent of respondents believe the administration needs to “rethink” how it approaches major issues facing the United States (bit.ly/1ph8sLs). Sixty-four percent said Obama should replace some of his senior staff after the election (bit.ly/1rTVVbb).

In Case You Missed It:  2021 AZ Elections Procedures Draft Analysis: OVER 170 Fraud Concerns Found By EZAZ – 45 Issues Published As Of This Morning
Posted in Tyranny and tagged Democrats, Election, Obama, United Socialist States of America.

US Supreme Court to Decide If Jerusalem Is In Israel

The US Supreme Court is about to decide Monday in the Zivitofsky vs. Hillary Clinton case, that involves a demand...