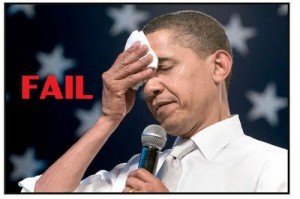 If President Obama suffered a “shellacking” in the 2010 elections, then what he endured Tuesday night was nothing short of a vicious gangland beatdown the likes of which have rarely been seen before in the history of electoral politics.

This, of course, is a wonderful and well-deserved outcome. But beware: America now enters the two most dangerous years of her existence — or certainly the most dangerous since the Great Depression and possibly going all the way back to the Civil War.

Not to dismiss the promising results of Tuesday’s election.

Voters clearly and forcefully rejected the party, politics and policies of President Obama. They slapped his socialist agenda back into the days of Soviet gulags, where it belongs.

His grand visions of mighty government ruling unchecked over desperate ghettos have been snuffed out.

Gone, too, were the so-called “low-information voters” who have been coaxed to the polls since 2008 on lies and false promises that the federal government would solve all their problems.

They are used up and wrung out.

Even the onslaught of threats and desperate accusations in endless emails to their Obamaphones couldn’t motivate those people to the polls one more time.

Voters stripped him of his baldly partisan use of the United States Senate as a graveyard for all House legislation in order to protect his Democrats from tough votes and insulate the President from reality.

The little man with giant fists got staggered by a nasty uppercut from voters even though Reid saw it coming for weeks. Now, the ex-boxer stumbles on the canvas all tangled in the ropes, waiting for the bell.

And voters also rejected the loony-toon delusions of House Democratic Leader Nancy Pelosi. Honestly, the woman should be running a hat and wig shop in Haight-Ashbury, selling weed and prescription pills on the side. How it is that Democrats in Congress have taken her so seriously for so long will baffle historians for decades.

The silver lining for Democrats today is now they now have the perfect excuse to bounce both of them out of leadership forever.

And this is where things get very, very dangerous for America. President

He mocks the powers of Congress. The Supreme Court has slapped him down more than any president in recent times. All of this as he tells us he is an expert on constitutional law.

Now come his very explicit threats to pass more illegal and unconstitutional presidential edicts to grant amnesty to illegal aliens already in the United States. This, in turn, will issue invitations for millions more illegals to come streaming across the border.

It will not end at immigration. Unchecked power is addictive.

Disowned by Democrats and made to feel irrelevant in this election, President Obama’s enormous and unjustified ego is deeply wounded. He is frustrated and feels caged, cornered. This is when people like him are most dangerous.

Buoyant Republicans will make an effort to engage him.

Franklin D. Roosevelt’s court-packing scheme during the Great Depression was nothing like the strains this president has put on Constitution. Indeed, not since the Civil War has America faced such a dire threat to her existence as a lawful, constitutional republic.

The difference in leadership between then and now could not be more striking.

To bind the union, Abraham Lincoln took an economic and political war and elevated it into something higher. He made it about emancipating slaves and won. And saved the Republic.

This president does the opposite. He got elected promising to elevate politics but instead finds unity and sows discord, often inciting racial divisions.

America’s only hope today is that President Obama finally turns to the bust of Lincoln he keeps in the Oval Office and listens.

• Charles Hurt can be reached at [email protected], or on Twitter at @charleshurt.

‘Election Eve Dump:’ Eric Holder Releases Fast and Furious Documents That Got Him Cited for Contempt

By Joel Gehrke Justice Department officials provided House investigators with thousands of documents related to Operation Fast and Furious that...