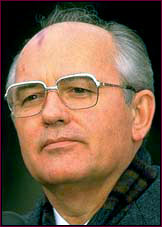 The 83-year-old accused the West, particularly the United States, of giving in to “triumphalism” after the collapse of the Soviet Union and the dissolution of the communist bloc a quarter century ago. The result, he said, could partly be seen in the inability of global powers to prevent or resolve conflicts in Yugoslavia, the Middle East and most recently Ukraine.

“The world is on the brink of a new Cold War. Some are even saying that it’s already begun,” Gorbachev said at an event marking the 25th anniversary of the fall of the Berlin Wall, close to the city’s iconic Brandenburg Gate.

Western policies toward Russia championed by Washington have led to the current crisis, and if the confrontation continues, Europe will be weakened and become irrelevant, former Soviet leader Mikhail Gorbachev warned.

Speaking to a forum in Berlin amid the celebration of the 25th anniversary of the fall of the Berlin Wall, he called on western leaders to de-escalate tensions and meet Russia halfway to mend the current rift.

Gorbachev gave a list of examples of  policies, including the expansion of NATO into Eastern Europe and the development of an anti-ballistic missile system, military interventions in Yugoslavia and Iraq, the west-backed secession of Kosovo, the crisis in Syria and others. The Ukrainian crisis is a “blister turning into a bleeding, festering wound,” he said.

NATO’s expansion to the east, eliciting fear and distrust in Russian political and civil circles, which has led us to the present day.

One the same note there has been a  refusal from Hungary’s Prime Minister Viktor Orban as the west is pushing Hungary to join the new US and EU Cold War against Russia and has even led  Hungarian officials to be been banned from entering the US.

The bullying of Hungary hasn’t made many headlines because it’s so-called “democrats” from the West who have been doing the bullying.

Viktor Orban the Hungarians PM is not a communist, he is a nationally-minded conservative who was an anti-communist activist in the late 1980s, but the attacks on him and his government demonstrate that it doesn’t matter what label you go under – if you don’t do exactly what Uncle Sam and the Euro-elite tell you to do – your country will come under great pressure to conform. And all of course in the name of“freedom” and “democracy.”

Orban, has annoyed the West by sticking up for Hungary’s own interests. In May he faced attack when he had the temerity to speak up for the rights of the 200,000 strong Hungarian community living in Ukraine.”Ukraine can neither be stable, nor democratic, if it does not give its minorities, including Hungarians, their due. That is dual citizenship, collective rights and autonomy.”

Russia and Hungary are the only tow nations against the Progressive far right order, and they are praying a heavy price for not going along the west with ultra leftist policies.