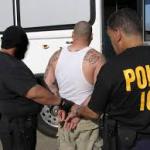 Dammit, what’s wrong with that bone-head, Bone-er, or Boehner, John (R-Ohio)?  The exasperated and much-maligned conservative public citizens of America just culminated SIX YEARS OF FRUSTRATION WITH OBAMA, another bone-head who can’t or won’t listen to the people who pay the freight in this country – the hard working public citizens of the United States who have said over and over again, “We don’t need Immigration Reform, we need IMMIGRATION ENFORCEMENT!

The old immigration laws were working fine, thank you, with perhaps a little tweak here and maybe another one there on occasion.  That is until we got unlucky and the feckless liberal Democraps decided that they needed more votes to get their insane programs of government growing, humungous spending and whopping bodacious taxation to just barely get by.  Which was also a prime recipe for the unstoppable rise in our national debt to the currently outlandish level of SEVENTEEN and ONE HALF TRILLION DOLLARS and still rising.  Enough to keep our kids in abject poverty for their entire lives.

All of this conduct has been played up as just one big wonderful package of hand-outs to our ultra non-productive, non-working cult of recipients on the national dole of welfare, food stamps and any other loose cash lying around the White House or halls of Congress that liberal Dems consider REDISTRIBUTABLE.  Now there’s a term that makes liberals everywhere smile like a kid on his first donkey ride; and come to think of it, that’s a term that I believe all of the taxpayers are on and are NOT enjoying, a ride provided by the Dems or Donkeys of our government.

But frustration with liberal Democrat programs and just plain old Obama chicanery of the pen and bypass actions; not to mention his non-actions on things like border patrols to keep the illegal aliens on their own Southside of the border, along with the Obama decreed ‘deport them and then let them back in again’ orders from the Executive Branch.

That frustration I just mentioned came to a head on Election Day 2014 when the people told the government in paraphrase, “We’re Mad as Hell and We Aren’t Gonna Take It Anymore” and kicked the Liberal Dems where the sun doesn’t shine and got them limping back to their musty drawing boards to ask Charlie Rangel what the hell happened.  But the answer came from Obama who whipped his favorite pen out of his pocket and indicated that he would use it to create illegal immigration reform.

There’s that word again, ‘reform’, the word that hides and messes peoples’ minds into thinking that they are going to correct something that doesn’t need to be fixed.  And guess what?  Here also comes the Speaker out of the shadows with a new “mandate” and says, “our immigration system is broken, and it needs to be fixed.  I’ve made clear to the president that if he acts unilaterally on his own outside of his authority,  there will be no chance for immigration reform moving in this Congress. It’s as simple as that.”

I think the Speaker WANTS Obama to act unilaterally so he’ll have his excuse to do just as he has been doing recently – NOTHING.  He even says if it happens, “there will be no chance for immigration reform moving in this Congress.”  Well I think the people should rise once again as they did on November 04 and tell Bon-er , “we don’t need immigration REFORM, we need immigration ENFORCEMENT.”

If they start “reform” ing the immigration laws it will be more like tweaking them by making concessions to various groups and to the Liberal Dems, and then we will wind up with laws just as Obama would like to see them.  I think Bone-er is afraid of Obama and the left and he would just as soon give up on the whole question.  Right after the elections he said, “I’ve told the president before that he needs to put politics aside and rebuild trust – and rebuilding trust not only with the American people, but with the American people’s representatives here in the United States Congress.” (Quote supplied by Melanie Hunter of CNSNews.com on Nov. 06, 2014)

That means he wants the president to work with him; you know, “bipartisanship”?  The meaning of that word to liberal Dems is, “we’ll do it my way.”

And just because of this one single issue, I would like to see a different person become Speaker.  Someone with strong conservative resolve that knocks the left out of the way of clearly new efforts of ENFORCEMENT.  Current laws may need some tweaking but total reform can only mean softening restrictions to please Obama and his Party.

REFORM is a platform for major change with materials provided by both parties and could be disastrous.  ENFORCEMENT is simple; just obey the current laws.

And while we’re on the subject of bone-heads let’s hear it for the GOP head bone-head of the U S Senate, Mitch (no relative) McConnell who after all the new winning candidates campaigned on a repeal ObamaCare platform, including himself (believe it) now that he is safely elected,  does a 180 and spits on the American voters by refusing to do anything to quit ObamaCare.  What a sleazy con-artist that guy is.  He should be forced to resign in disgrace.

Example:  Just five days before the election, Mitch McConnell was campaigning on a promise to repeal ObamaCare.  Just one day after the American people handed the Republican Party a historic victory in the House and Senate Mitch McConnell has betrayed us saying he’s not interested in a full repeal of Obamacare.

I have been saying and naming the prominent liberal Democrats who have proven themselves to be flat out LIARS and unworthy of holding a high government elected office; today I add Mitch McConnell to that sleazy and contemptible list of miscreants.

May he and all other elected politicians who break their promises to their constituents rot in hell for their contemptuous behavior.

And may Mitch McConnell be rejected for Majority Leader of the Senate by his peers.

In Case You Missed It:  VIDEO: SHOTS FIRED At Portland Dueling Protests between Antifa and Proud Boys
Posted in Tyranny and tagged Border, Illegal Immigration, Obama.

This afternoon, the Supreme Court of the United States announced it will hear King v. Burwell, a challenge to the...