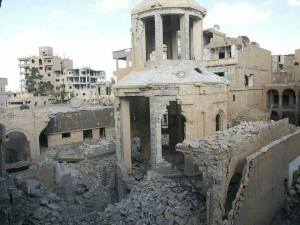 Islamist forces have blown up a church dedicated to the memory of the Armenian Genocide at the hands of the last Islamic Caliphate in 1915, burning the extensive library of manuscripts kept there and exhuming the bones of hundreds of victims interred there.

The priest responsible for the Der Zor memorial church in Syria, which stands on the site of a former concentration camp and burial ground for hundreds of thousands of dead, was given the opportunity to recognise Islamist forces as the legitimate government of northern Syria, or to have the church destroyed. After his principled refusal, the church was bombed by Islamist forces – first reported to be the Islamic State, but now thought to be al-Nusra, a cadet-branch of Al-Qaeda operating in Syria.

To complete the destruction of the site, the extensive archive of manuscripts and documents dating back to 1841 were burnt, and the bones of victims of the Armenian genocide were removed from the crypt and dumped by the side of the road, according to local reports. The church had already been bombed and damaged in 2012, but had gone some way toward recovery. The Foreign Minister of the Armenian state has called the September demolition a “horrible barbarity”.

The Independent newspaper reports the remarks of the local area priest who oversaw the memorial church, who said of the genocide in 1915: “During the Armenian genocide, the Turks entered the church and killed its priest, Father Petrus Terzibashian, in front of the congregation… Then they threw his body into the Euphrates. This time when the Islamists came, our priest there fled for his life”.

Burning Christian books is not uncommon in areas controlled by Islamists, and the priest recalls when Islamists sacked his own Church and home earlier in the year. Graffiti scrawled on the desecrated altar read “Thanks be to God for al-Qaeda, the Nusra Front and Bilal al-Sham”, and they didn’t spare his personal library either. He said: “They burned all my books and documents, many of them very old, and left my library with nothing but 60cm of ash on the floor”.

The Armenian Genocide of 1915 was part of a campaign of oppression by the last Islamic Caliphate, which led to the deaths of 1.5 million largely Christian Armenians. The beginning of the genocide was marked with a service at the Der Zor church, to mark the anniversary on April 25th of the first arrests of Armenian intellectuals around what is today the city of Istanbul, in modern Turkey. As the massacre intensified, scenes that would not be out of place among the worst atrocities of the Islamic State today unfolded, including beheadings, crucifixions and hangings.

To have utterly destroyed this memorial just six months shy of the centenary commemorations of the genocide may have been a calculated move. Events will still take place in modern day Armenia next year, but this church, which has been the centre of worship and memory for the dead of the genocide at the hands of the Ottoman Empire will no longer be there.

In Case You Missed It:  Proof that the Taliban takeover was not Biden's incompetence But TREASON!
Posted in Terrorism and tagged Christian Genocide, Christians Middle East, ISIS, Islam, Jihadists, Muslims, Syria, Terrorism.