The number of violent crimes across the United States is estimated to have dropped by 4.4% in 2013 from the year before, according to data recently released by the FBI. In all, the number of such crimes declined by nearly 15% in the last 10 years.

Putting this drop into context, John Roman, senior fellow at the Urban Institute, told 24/7 Wall St., “A 4.4% reduction in violent crime is astonishing. If you saw a similar increase in GDP, or a similar decrease in unemployment, it would be huge national news.”

Even as the nation becomes increasingly safe, a number of large U.S. cities still stood out for their low crime rate. Across the country, 368 violent crimes were reported for every 100,000 people last year. Such crimes include murder, rape, aggravated assault, and robbery. In America’s 10 safest cities, there were fewer than 100 such crimes for every 100,000 people. Based on violent crime data published by the FBI’s 2013 Uniform Crime Report, these are America’s safest cities.

In many of the safest cities, murder counts were extremely low. Nationwide, the FBI recorded 14,196 murders in 2013, or 4.5 murders for every 100,000 people. By comparison, each of America’s 10 safest cities reported less than five murders overall last year. Naperville, Illinois and Frisco, Texas did not report a single murder in 2013.

According to the Urban Institute’s Roman, reducing crime “is about economic policy, it’s not about crime policy.” He added, “The idea is that if you make a city more economically vibrant, you attract people to that city who bring with them resources to try and make that city better. And those resources benefit all of the people who are already there.”

Education is another factor related to crime rates. More than 92% of adults 25 and older had completed at least a high school diploma in eight of the nation’s safest cities, well above the national rate of 86.6%.

However, higher incomes and an educated population alone may not explain all differences in local crime rates. Roman noted that, in some areas where crime is especially problematic, there are “structural disadvantages in that crime is such a cultural norm that it’s hard to fix.”

The FBI has attempted to discourage direct comparisons of crime rates between cities because local factors cause reporting to vary considerably between cities. Despite this characterization, Roman suggested that some comparison can be useful. “To me it’s analogous to saying we shouldn’t rank how well schools are doing. How are you ever supposed to help the lowest-performing schools if you don’t tell them they’re the lowest-performing school?”

To identify the safest cities in America, 24/7 Wall St. reviewed violent crime rates among the nation’s cities with populations of 100,000 or more from the FBI’s 2013 Uniform Crime Report. Property crime rates also came from the FBI’s report. The data were broken into eight types of crime. Violent crime was comprised of murder and nonnegligent manslaughter, rape, robbery, and aggravated assault; and property crime was comprised of burglary, arson, larceny, and motor vehicle theft. In addition to crime data, we also reviewed median household income, poverty rates, and educational attainment rates from the 2013 Census Bureau’s American Community Survey.

These are the safest cities in America.

There were just 97 violent crimes committed per 100,000 people in Sunnyvale, the 10th lowest rate among large U.S. cities, and considerably lower than the national rate of 368 per 100,000 people. Robberies and aggravated assaults accounted for the bulk of the city’s violent crimes, and there were just four documented murder cases last year. Like in other large cities, safety is often accompanied by financial well-being. A typical household in Sunnyvale earned nearly $99,000 last year, more than in all but four other large cities. Sunnyvale residents were also among the least likely to live in poverty, with a poverty rate of just 7.3%. As is common among wealthier populations, Sunnyvale adults are well-educated. Nearly 60% of adults 25 and older had at least a bachelor’s degree as of last year, one of the highest attainment rates nationwide.

Glendale is a suburb of Los Angeles and one of the safest cities in both California and the nation. Last year, just one murder was recorded in the city. Additionally, there were just 97 incidents of aggravated assault, or about 50 per 100,000 residents, which was one of the lowest rates in the United States. By comparison, nationwide there were more than four times the number of assaults for every 100,000 people. Also impressive, Glendale has been able to keep crime rates low despite lacking as wealthy residents as in many other extremely safe cities. The median household income in Glendale last year was $50,172, lower than the national median of $52,250. 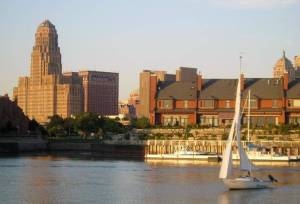 After falling between 2010 and 2012, the violent crime rate in Amherst increased in 2013 — from 75 reported incidents per 100,000 residents in 2012 to 90 per 100,000 residents last year. This was the exception among the safest U.S. cities, all of which reported declining crime rates in 2013. Despite the increase, the city, located just outside of Buffalo, is still quite safe. There was only one murder recorded in Amherst last year, and property crimes were also very rare. There were 27 motor vehicle thefts per 100,000 people in Amherst last year, lower than in every city except for Naperville, Illinois. Burglary was also extremely uncommon in the area. Just 172 burglaries were reported per 100,000 residents last year, the fourth lowest rate among large U.S. cities and substantially lower than the national rate of 610 burglaries per 100,000 Americans.

Less than 6% of Gilbert residents lived in poverty last year, nearly the lowest rate in the nation, and likely a major factor in the region’s low crime rate. There was just one murder reported in Gilbert last year, and only 21 robberies per 100,000 residents, a fraction of the national robbery rate of 109 per 100,000 people. Gilbert’s stellar crime record may be a relatively isolated phenomenon, as surrounding areas reported far higher levels of violent crime. Nearby Phoenix, for example, reported a violent crime rate well above the national rate. 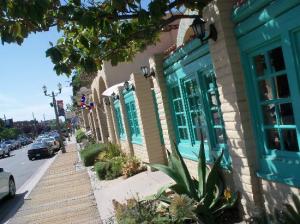 Temecula is situated between Los Angeles and San Diego in the southwestern corner of Riverside County. In 2013, the city of nearly 107,000 residents had just 91 violent crimes in total. Temecula also recorded just 38 aggravated assaults last year, or 36 reported assaults per 100,000 residents. This was lower than in all but two cities. Property crime in Temecula, however, was comparatively more common. Last year, Temecula reported 2,670 such crimes for every 100,000 people, not much lower than the national property crime rate of 2,731 per 100,000.

Frisco reported a total of just 100 violent crimes in 2013, fewer than almost any other city. Few large cities had less incidents of robbery and aggravated assault. Also, the city did not record a single murder last year.High incomes may contribute to the area’s low crime rates. Interrelated factors such as family wealth, and well-funded schools, may help discourage crime. Frisco had the highest median household income of any large U.S. city last year, at almost $110,000. Additionally, Frisco was one of just two large cities with a poverty rate of less than 5% last year. 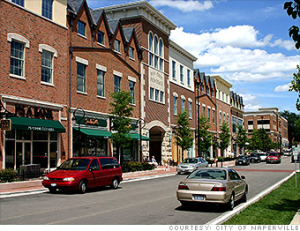 Naperville is one of the wealthiest cities in the United States, with a median household income of more than $105,000 last year. Naperville also had the lowest poverty rate of any large U.S. city, at just 4.4%. A lower poverty rate may help explain the city’s extremely low levels of violent crime. There were no reported murders in Naperville in 2013, while few cities reported less cases of rape per 100,000 residents. Adult residents are also exceptionally educated. Nearly 98% of people 25 and older had at least a high school diploma, the highest rate nationally, while more than 63% had at least a bachelor’s degree, also among the highest rates.

Cary’s median household income of $89,405 in 2013 was one of the highest among large U.S. cities. High incomes and the area’s remarkably low poverty rate of just 5.5% likely contributed to Cary’s low crime rates. There were just 69 violent crimes per 100,000 people in 2013, down from 82 per 100,000 the year before. Most violent crimes in Cary were aggravated assaults. Still, Cary had one of the lowest assault rates in the nation, at 55 per 100,000 people. Economic growth often leads to declining crime rates, according to the Urban Institute’s Roman. The Raleigh-Cary metro area was identified by IHS Global Insights as among the fastest growing metro areas in the country in 2013. 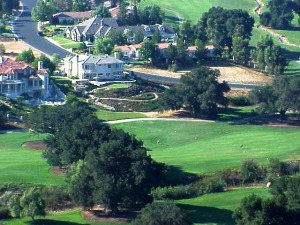 Just 113 violent crimes were reported in Irvine last year, a city with more than 235,000 residents. As a result, the city’s violent crime rate was just 48 per 100,000 people, the lowest among large U.S. cities. This is the 10th straight year in which Irvine has had the nation’s lowest violent crime rate among large cities. Irvine’s property crime rate was also extremely low, ranked ninth lowest in the nation. The city’s consistently low crime rates are likely due, at least in part, to its high-earning and well-educated population. Last year, the median household income in Irvine was $87,830, and more than 61% of adults had at least a bachelor’s degree, both among the highest figures in the nation.

Visit 24/7 Wall St to see the most dangerous cities in America.

The World’s Most Persecuted Group

The International Society for Human Rights reports that 80 percent of all acts of religious discrimination are directed against Christians....