Yossi Dagan, the head of media relations for the Samaria Regional Council, filed a formal complaint Tuesday with the Government Press Office (GPO) against a CNN reporter for equating the terrorists involved in the Har Nof massacre with the victims. 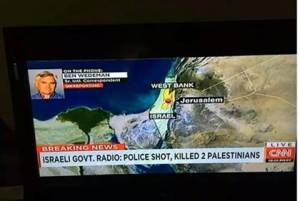 According to Dagan, American CNN reporter Ben Wedeman was responsible for the headline describing the massacre under the headline, “Israeli police shot dead two Palestinian civilians” – when, in fact, the shooters were Palestinian terrorists who killed four Jews and wounded eight others as they prayed the morning service before being killed in a gun battle with police.

Dagan charged that the headline was a serious violation of international journalism ethics, and called to revoke Wedeman’s press license and, generally, bring anti-Semitic coverage of terror attacks by foreign journalists to an end – permanently.

“There is no reality elsewhere in the world where journalists can report a terror attack in this style,” he stated. “This rule should also apply to foreign reporters in Israel. There is good and there is bad, there are killers and there are victims.”

“The media arena in recent years has become an equally important battlefield for Israel, and it must use all the tools at its disposal to demand certain baselines in its media coverage,” he continued. “Coverage like this legitimizes the next murder; whoever loses in this loses the next war as well.”

Dagan also noted that the Samaria Regional Council has been closely scrutinizing foreign media coverage of events, and that this represents a disturbing trend.

“CNN‘s strange headline is a direct continuation of a series of other reports in the context of the Israeli-Palestinian conflict that appeared recently,” the letter said, and noted for example that the report on the car rampage near the Jerusalem light rail last month by the Associated Press began with the title “Israeli police shot a man in East Jerusalem.”

“Brits bombs children in Berlin”. This could have been the CNN headline in December 1944.  The motive for making such a headline would be to portray the Nazi government as fighting a noble cause to protect the people in the German capital, and make the United Kingdom look like the war criminal.

In similar way, the CNN do its best to portray the Israel police as a force that harms “Palestinians”.  Two Arabs are dead, and the CNN press the “Breaking news” button in favour of cold blooded killers. No need to tell that these two Arabs just had slaughtered four Jews during their morning prayer in a synagogue.

What can we learn from the Western media coverage of Israel?

The press in Washington D.C and Paris acts as wicked as the Arab media. The present antisemitism is as bad as the antisemitism that brought Hitler to power in Berlin.

Obama once declared that an influx of illegal immigrants will harm “the wages of blue-collar Americans” and “put strains on...