The Islamic State beheaded another American this week. The Obama administration’s response revealed its stubborn determination to deny reality. 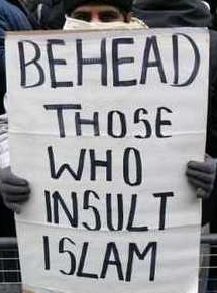 Peter Kassig was a former Army Ranger and emergency medical technician who was moved by the suffering of Syria’s civilians and returned to the region after his discharge to provide aid. He helped some of the one million Syrian refugees who have fled into Lebanon, using his own funds to buy supplies like diapers and other necessities and driving an ambulance into Syria. He was kidnapped in October of 2013.

According to those who analyze such things, something went wrong with the video of Kassig’s beheading. It wasn’t caught on tape. We can speculate that the former Ranger had enough strength left to fight back. Perhaps his was not the only blood on the sand. In any case, ISIS felt obliged to offer video of Syrian soldiers’ beheadings instead, together with a tutorial on the history of the Islamic State, which began as an al-Qaida cell. The Islamic State executioner joked over Kassig’s severed head, “He doesn’t have much to say.”

President Obama condemned the atrocity, saying that Kassig “was taken from us in an act of pure evil by a terrorist group.” He continued, “While ISIL revels in the slaughter of innocents, including Muslims, and is bent only on sowing death and destruction, Abdul-Rahman was a humanitarian who worked to save the lives of Syrians injured and dispossessed by the Syrian conflict.”

Hold on. Kassig converted to Islam and took the name Abdul-Rahman — but only in captivity. Obama’s insistence upon using his Islamic name reflects his continuing belief that by denying Islamic extremism, he can promote peace. “ISIL’s actions represent no faith,” he said, “least of all the Muslim faith, which Abdul-Rahman adopted as his own.”

When someone converts at the point of sword, in hopes of saving his life, is that “adopting the Muslim faith as his own”? Who is Obama respecting by using the Islamic name: Kassig or his executioners?

The New York Times explained it this way: “The president used the Muslim name that Mr. Kassig adopted after his capture, making the point that the Islamic State had killed a fellow Muslim.” If that’s the motive for using the Islamic name, it raises this question: Who does Obama imagine is unaware that the Islamic State kills Muslims? Certainly in the very tape confirming the beheading of Kassig, ISIS provided graphic and high-definition evidence of the execution of 13 Syrian soldiers. They weren’t Baptists. A recent UN report depicts widespread ISIS terror and horror across Syria and Iraq. “Executions have been recorded in Aleppo, Raqqa, Idlib, Al-Hassakeh and Deir Al-Zor provinces,” according to a Reuters account. “Witnesses saw scenes of still-bleeding bodies hanging from crosses and of heads placed on spikes along park railings.”

But Obama is still at pains to protect the good name of Islam. He condemns the barbarism of ISIS and other terrorists, but feels the need to quickly add that their crimes “represent no faith, least of all” Islam.

Least of all? The president is living in an alternate reality. Throughout the Muslim world, extremism is in full bloom. Only a minority of Sunni extremists travel under the name al-Qaida. Others are called al-Nusra (Syria) and AQIM (North Africa) and IS (Iraq and Syria) and Wahhabi (Saudi Arabia) and Boko Haram (Nigeria) and Abu Sayyaf (Philippines) and Taliban (Afghanistan and Pakistan) and Lashkar-e-Taiba (Pakistan) and al-Fatah (Palestinian territories) and Hamas (Gaza). The Shia extremists include the Islamic Republic of Iran, Hezbollah (Lebanon) and the Mahdi Army of Iraq.

Most Muslims worldwide doubtless want only to be left in peace. They are the first, but far from the only victims of a movement that has taken the Islamic world by storm, and that Barack Obama thinks he can wish away by denying.

Congress Needs to Remain Engaged on the ICANN Transition

The U.S. National Telecommunications and Information Administration (NTIA) has contracted with the Internet Corporation for Assigned Names and Numbers (ICANN)...