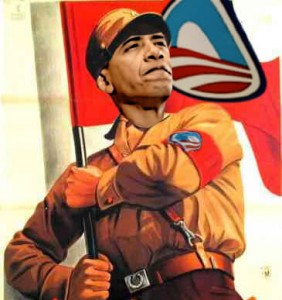 After committing a long list of well documented crimes against the people of the United States, the man – and I use the term advisedly – occupying the White House and the formerly respected office of President, has finally topped his shameful list with the penultimate political felony, treason.

With clear knowledge that declaring his so-called amnesty for millions of criminal invaders – including countless murderers, rapists, child molesters, violent thieves, pimps, prostitutes, drug dealers and addicts, virtual slavers, and terrorists – is a totally unconstitutional act, and therefore, totally illegal, Marxist revolutionary Barack Hussein Obama has committed an act that will wreck our economy, put us more trillions into debt, destroy our educational and health systems, and permanently put more millions of American citizens out of work. Black people, the group he has lied so often about caring about, will be especially hard hit, with those at the bottom of the pile, socially and economically, doomed to stay there in perpetuity.

That this action will likely bring on economic and social collapse, race wars (see his involvement in Ferguson, MO), and perhaps another civil war is just fine with him, and with many of his fellow-travelling Democrats like Harry Reid and Nancy Pelosi, and their billionaire puppet masters like George Soros and son, and Tom Steyer. The destruction of America as an independent, sovereign nation and the subsuming of it as a subservient source of raw materials and cheap labor into a global fascist dictatorship has been their goal since at least 1913. It appears the fascists are about to realize their dream – and our worst nightmare.

In the meantime, the supposed opposition, the Republican Party, is doing what in the days since the departure of Ronald Reagan it does best: Nothing. Beyond mealy-mouthed cheap talk, they are allowing this to happen, right on prime-time TV. Well, not quite prime-time TV since the major networks didn’t cover it. The traitor didn’t want legal Americans to find out what he was up to right away, so it was only on Spanish-speaking TV. He didn’t want We, the People, to find out until it was too late to stop his coup d’état.

The Constitution, for all intents and purposes, is dead. Barry Soetoro, the Marxist Indonesian citizen and apostate or taqiyya Muslim, posing as Barack Hussein Obama, and the co-conspiratorial revolutionists in his administration, Congress, and the judiciary have made a dirty joke of their oaths of office, repeatedly and with impunity, violating every article of it, including the amendments. Instead of the Rule of Law, lawlessness rules and we are living under the Rule of Lies. And rather than taking a forceful and steadfast stand against these traitors, our self-proclaimed “leaders”, our supposed conservative, patriotic, elected representatives have gone into their usual dithering and caving mode, promoting their own Big Lie that this isn’t really all that bad, and they’ll fix it all at some amorphous point in the future that will never arrive.

We, the People, have once more been conned and left to twist slowly, slowly in the wind.

However, we are not totally without recourse. It is still quite possible that the States will find the patriotic backbone that the federals so clearly lack. The States can refuse to recognize the authority of the lawless usurper and his aiders and abettors. They can refuse to obey the unconstitutional dictates from Washington and instead, enforce the immigration laws that stood our country in good stead until the Democrats and Republican fascists falsely declared the system “broken”. Our county sheriffs can assert their vested authority and tell the feds to _____ (fill in the blank). If We, the People, apply the pressure and don’t let up – calling, writing, emailing, showing up individually and in mass marches – even Democrat governors may stand up and do what is right. Who among them wants to go down in history as presiding over a state that was turned into a Third World sewer due to their cowardly siding with totalitarian destructionists?

Every state has a National Guard that is for the most part made up of patriotic, middle-class Americans, the exact people that the traitor Obama-Soetoro and Co. have been targeting for the past six years. Should the traitors in Washington decide to try to use force to gain compliance with their lawless dictates, the Guard, in conjunction with the millions of We, the People, who actively still support the 2nd Amendment, and very likely, many local units of the Reserves should be quite adequate for our defense. One hope that things will never get to this point, but it’s not something to be feared to the point of backing down and giving up.

Our federal government has turned on us, like a rabid dog. Now, it’s up to us to make sure it doesn’t bite us.

By Dr. Don Boys   What does a president have to do to get impeached? After Lincoln’s assassination, Johnson became president...