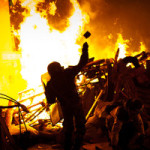 The protests in Ferguson, Mo., on Friday night grew larger than previous days’ gatherings of protesters, despite the rain and cold weather. Police officers used a megaphone to ask protesters to leave the street outside the Ferguson Police Department or they would be arrested. In this video, protesters responded by chanting ”F— the police” and shouting “We don’t give a f— about your laws like you don’t give a f— about our lives.” Warning: Video contains foul language.

Protesters then moved to West Florissant Street and blocked traffic in front of a McDonald’s restaurant and chanted, “Who shut sh– down? We shut sh– down!” Warning: Video contains foul language.

The employees working inside of the 24-hour McDonald’s restaurant were so frightened that they locked the doors and temporarily closed the store until protesters moved down the street.

The protesters meanwhile did not seem nearly as concerned about potential violence, and some even brought their children to help block traffic.

A grand jury’s decision to indict police officer Darren Wilson, who is suspected of shooting 18-year-old Michael Brown, could come at any moment. Residents and law enforcement alike are preparing for a worst-case scenario that could include the loss of life as a result of violent protests.

In Case You Missed It:  Biden Blasts Americans on Eve of 9/11: ‘We Have Witnessed Violence in America Against Muslims – True Followers of a Peaceful Religion’ (VIDEO)
Posted in Tyranny and tagged Crime, Democrats, Liberal Fascism, Liberalism, Protests, Riots.

How to Rebuke a President

BY JAY COST For responding to a president who defies his constitutional limits, Congress is said to possess four powers:...