For responding to a president who defies his constitutional limits, Congress is said to possess four powers: to impeach, to defund, to investigate, and to withhold confirmation of nominees. 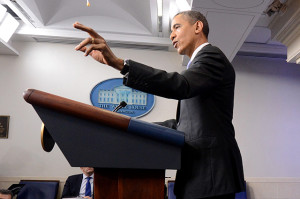 But there is a fifth recourse, which the new Republican Congress might consider in view of President Obama’s executive amnesty for illegal immigrants: the power to censure. In fact, censure could work in tandem with Congress’s other powers, helping the legislature make the moral case for responding to the president’s lawlessness.

Presidential censure is a rare occurrence. Most notably, in 1834, the Whig-controlled Senate censured President Andrew Jackson, a Democrat, for moving federal deposits from the Second Bank of the United States to local banks, derisively called his “pets” because most were operated by loyal Democrats.

Jackson’s legal justification was dubious at best. Under the law, only the secretary of the Treasury could initiate such a transfer, and then only if the funds were deemed insecure. But the Bank had been impeccably run since Nicholas Biddle became its president in 1822. An investigation had ascertained that the funds were perfectly safe, and the House had voted overwhelmingly to affirm that fact. Treasury Secretary William Duane, moreover, refused to remove the money or to step down so Jackson could install somebody who would. Jackson fired Duane, replacing him with Roger Taney without Senate confirmation. Taney’s cronies would go on to grossly mismanage funds in Jackson’s pet bank in Baltimore.

This series of actions added up to a severe presidential encroachment. So the Senate—led by Henry Clay and Daniel Webster—censured Jackson by passing this resolution: “Resolved, That the President, in the late Executive proceedings in relation to the public revenue, has assumed upon himself authority and power not conferred by the Constitution and laws, but in derogation
of both.”

The censure wounded the president’s bountiful pride, so much so that in 1837, Missouri senator Thomas Hart Benton, a fierce Jackson loyalist, had the resolution stricken from the record.

The facts surrounding Obama’s amnesty of illegal immigrants parallel those of Jackson’s deposit removal scheme. In both instances, we see a president circumventing the traditional and proper constitutional pathways to confer a partisan benefit, creating a dangerous precedent. Jackson had no right to remove deposits that Congress deemed safe; Obama has no right to exempt large classes of people from laws that were duly authorized by the government. Jackson’s actions were meant to rebuke Biddle for supporting Henry Clay for president in 1832 and, later, to supply patronage to pro-Democratic bank managers; Obama’s action is a blatant attempt to curry favor with a sought-after voting bloc and make his partisan opponents look bad in comparison. Both presidents’ unilateral measures admit of no limiting principle; the law is abrogated simply because the president finds it politically inconvenient. If this became a norm, it would destroy our system of government.

Indeed, Clay’s denunciation of Jackson’s deposit removal rings true today: “We are in the midst of a revolution, hitherto bloodless, but rapidly tending toward a total change of the pure republican character of the government, and the concentration of all power in the hands of one man.” Obama, like Jackson before him, seeks to aggrandize the executive branch at the expense of the legislative branch, unbalancing the constitutional regime and justifying censure.

Censure alone, however, would be a meek gesture. Devoid of substance, it would signal legislative impotence; perversely, it might even strengthen Obama’s hand. Something similar happened in 1834 when, after the Senate censured Jackson, nothing changed. The money stayed in the pet banks, and all that Clay really managed to do was offend Jackson’s sense of honor. As historians David and Jeanne Heidler rightly note, “Clay won this battle, but Jackson won the war.”

Thus, censure should be wielded in conjunction with other legitimate legislative powers.

Recent news reports have suggested that Republicans have a plan in mind. As Byron York wrote in theWashington Examiner:

Republicans will work on crafting a new spending measure that funds the entire government, with the exception of the particular federal offices that will do the specific work of enforcing Obama’s order.

Republican sources liken the contemplated action to Congress’s move to stop the president from closing the terrorist detention facility at Guantánamo Bay: In 2009, lawmakers denied Obama the money he would have needed to proceed. Guantánamo remains open.

This is all to the good. And a denial of funds could go hand-in-hand with more intensive oversight of the agencies charged with carrying out the president’s lawless decree.

In policy terms, this seems an appropriate response, but in terms of public relations, it might fall short. Will the public understand the stakes of the battle if Congress responds to Obama’s breach of the constitutional order with a squabble over line-items in the budget for Citizenship and Immigration Services? If symbolism devoid of substance is useless, substance not made vivid by appropriate symbolic acts might leave the people unaware of the stakes and less likely to join the cause.

Accordingly, Congress might consider combining budgetary and oversight actions with a censure, which would signal to the public the gravity of the president’s actions.

A censure, after all, is a moral statement—and if the Republican Congress intends to respond to the president’s executive overreach, it needs to make a strong moral claim. The Republicans’ political failure in the last two government shutdowns (1995 and 2013) had a moral dimension: Republicans never explained convincingly why the actions they took were appropriate. A public statement by Congress akin to the Whig Senate’s 1834 resolution could supply the moral link between the president’s actions and Congress’s response.

Censure, moreover, would force red- and purple-state Democrats in the Senate to take a stand. They could either defy their president or risk their constituents’ wrath by letting him get away with his unpopular maneuvers.

In Case You Missed It:  Biden Admin to Send the Taliban Millions in US Dollars After Arming them with $83 Billion in US Military Weapons
Posted in Tyranny and tagged Congress, Constitution, Crime, Impeachment, Obama, Republicans.

Intelligence and military officials responded appropriately during the terrorist attacks on the U.S. diplomatic compound in Benghazi, Libya, a House...