A test at the leftist University of California, Berkeley – to fly the flags of Israel and the Islamic State and see how students respond to each. 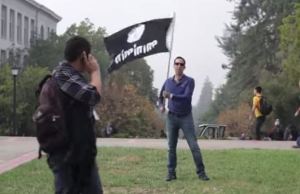 The result is very, very troubling, not least given which of the two entities has publicly and proudly beheaded US journalists and aid workers:

The merging of liberalism with radical Islamism is both natural and dangerous. It’s natural because the liberal’s and Islamist are both collectivists – both seduced by the totalitarian temptation.

They both love the notion of tribe that makes the weak seem strong, the misfit embraced and the aimless a man of destiny and purpose. And above all they love power.  As Bertrand Russell said, “Much that passes as idealism is disguised hatred or disguised love of power.” They are naturally drawn particularly to violence, since their enemies tend to be father-figures or the society that refuses to share their monstrously inflamed judgement of their genius – enemies who are generally win on the battlefields of debate or democracy. And they tend to sympathise with those who have the same enemies.

Julie Burchill in The Spectator has a slightly different and dramatic take, although still related:

Watching the recent footage of Islamic State gang members haggling over the price of captured Christian women in a makeshift slave market — one of them wants a 15-year-old with green eyes, another wants to exchange a girl for a gun — I was reminded that Islamists are at least consistent in their hateful worldview and in a way uniquely honest. Even a terror gang as vile as the IRA tried to keep a lid on the rapes and paedophilia going on within its rancid ranks. But when Amnesty International first claimed in September that Isis were enslaving and abusing ‘hundreds, if not thousands’ of Yazidi women and children, it only took the group a few weeks to admit to the practice in their English language magazine, Dabiq, and breezily post videos of themselves doing just that.

Yet there are still a considerable number of people on the left making excuses for them — mostly at the Guardian, the house magazine of ‘the silly led by the sinister’, as the sainted Christopher Hitchens called the Not In My Name marchers. And with Isis so frank about its own foulness, I’ve come to the conclusion that certain strange types are so sympathetic to Islamism not despite the way it treats women — but, at least partly, because of it.

There are other reasons, of course. The western liberals have been a busted flush for so long, caught up in its own eternal infighting, that it must feel good to be on a side apparently winning with old-fashioned brute force. Then there’s our old mate paint-chart politics: choose the side with the darkest skin on principle, no matter how their belief systems actually treat people; thus democratic Israel, which gives full civil rights to women and gays, is worse than the countries which surround it, which don’t but are darker…

But, to get all Freudian, I think a lot of the reason that some left-wing men seem to have so much time for Islamism is to do not with race but sex — specifically, with suppressed feelings of resentment towards the march of feminism, which they could never in a million years admit to. After years of being yelled at by female comrades whenever they inquired about the likelihood of a hot beverage being imminent, imagine how excited they must get watching big bad men in balaclavas selling ‘slave girls’ in a sweltering marketplace.

I recommend to your readers James Glasov’s terrific book ‘United in Hate: The Left’s Romance with Tyranny and Terror’, which analyses the Left’s romance with militant Islam as a continuation of the Left’s love affair with communist totalitarianism in the twentieth century.

United in Hate: The Left’s Romance with Tyranny and Terror