A grand jury has reached a decision with respect to whether or not to indict Police Officer Darren Wilson for fatally shooting black teen Michael Brown. Reporters on the ground in Ferguson and will be posting live updates from the ground. The grand jury’s decision is expected to be revealed around 9:00 p.m. EST. 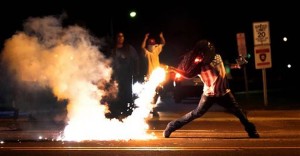 *LIVE UPDATES*
9:34 EST – Some “witnesses” made claims about what happened the day Mike Brown was shot even though they did not see the shooting occur, St. Louis County prosecutor Robert McCulloch stated.

9:30 EST – Officer Darren Wilson will not be indicted.

9:23 EST – “The law allows all people to use deadly force to defend themselves in certain situations,” a prosecutor for the Ferguson case said.

9:20 EST – “Our investigation has been completed,” a prosecutor said of the Ferguson decision. He said that the most significant challenge in the case has been the “24 hour news cycle” looking for “something, anything” to talk about.

The decision was announced by prosecuting attorney Robert McCulloch, who discussed the lengthy deliberation period of the grand jury citing consideration of differing witness reports as a one reason for the unusually long session.

Ahead of Monday’s announcement, Missouri Gov. Jay Nixon made a plea for peace.

“Our shared hope and expectation is that regardless of the decision, people on all sides show tolerance, mutual respect and restraint,” he said.

The men and women of the National Guard also will be in the area to provide security at critical facilities like firehouses, police stations and utility substations, and offer logistical and transportation support as needed. This will free up law enforcement officers to do their jobs effectively.

Police experts have said officers generally have leeway to use lethal force if they reasonably fear they are in imminent danger.

In Case You Missed It:  Why Has the US Election Process Been Ceded to the USPS Despite It Being Unionized and 92% of Its Donations Going to Democrats?
Posted in Freedoms and tagged Crime, Freedom, United Socialist States of America.

Ferguson Grand Jury: No Charges to Be filed against Police Officer

Missouri officials plan to announce the grand jury's decision that has been made on whether to criminally charge a  police...