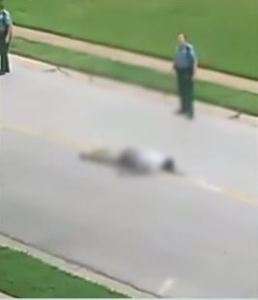 Race had zero to do with Brown’s death. If he were white and took the same actions, he would still be killed. Brown’s choices cost him his life.

“A crime scene investigator described swabbing Wilson’s gun with a Q-tip; the subsequent D.N.A. report found Mr. Brown’s genetic material on Officer Wilson’s Sig Sauer pistol. Similarly, D.N.A. from Mr. Brown was also found on the officer’s uniform pants and shirt. In his own testimony, Officer Wilson told jurors that Mr. Brown had grabbed the gun while the two scuffled at the car.” -NYT Nov. 25, 2014

Here is an example of evidence that supports the fact that Michael Brown was moving toward the officer:
GRAND JUROR: “So as far as physical evidence, we have the blood on the ground that was about 21 or 22 feet from where Michael Brown ended up.” p 4741 of grand-jury-testimony.pdf source:

“Transcripts of the Grand Jury Proceedings Here is a link to the transcript of the documents and evidence presented to the grand jury in Clayton, Mo., that was deciding whether to indict Officer Darren Wilson in the fatal shooting on August 9 of Michael Brown. The documents were released by the St. Louis County prosecutor, Robert P. McCulloch. — THE NEW YORK TIMES”

“Farther away from the car, the investigator showed with photographs, were two blood-spatter patterns – evidence showing that Mr. Brown was moving toward the officer, and the car, when he was killed in the second flurry of shots.” – NYT: Documents Released in the Ferguson Case

Ali Albayati, a neurologist in Iraq, learned of a little boy wounded in deadly bombings by ISIS terrorists the old-fashioned...