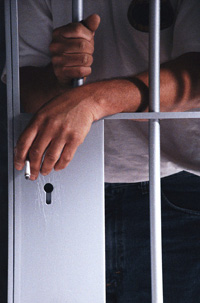 If there is any justice in this nation then some high profile individuals will to go to jail as a result of their ineptitude, incompetence, and irresponsibility as exhibited at Ferguson. But don’t hold your breath unless blue is your favorite color!

Highly placed officials such as President Obama, Attorney General Holder and Governor Nixon were the epitome of irresponsibility. Frankly, they are responsible for much of the looting, burning, and other illegal activities and should be held accountable. Obama met with the protestors and told them to “stay the course”! He also called for better police training rather than greater personal responsibility, stronger family values, and more church involvement.

Eric Holder went to Ferguson and told college students that he understood “their mistrust” and while he was the Attorney General, he was also “a black man”! Who cares? Moreover, he began a civil rights investigation! Holder is divisive, derisive, and may be a deranged Attorney General.

Soon after the shooting, Governor Nixon made a video promising “A vigorous prosecution must now be pursued.” What incredible malfeasance. He had assumed that Wilson should be tried before the facts were known!

Obama, Holder, and Nixon are the Larry, Curly, and Moe of Ferguson!

If a Tea Party official were to say that the illegitimate usurpation of power in Washington, the out-of-control IRS, DOJ, BATF, etc., require a call to arms to begin the “Second American Revolution,” he would be visited by a cadre of FBI, Homeland Security, and other jack-boot-wearing federal agents. The Federal Government would deem him irresponsible and illegal resulting in him being imprisoned.

Obama, Holder, and Nixon are the Larry, Curly, and Moe of Ferguson!

Police officers, like everyone, must be held accountable for their actions but they must feel secure, safe, and supported when they must use their weapons even at the cost of a life. Frankly, a police officer should be “forgiven” even if he makes an obvious mistake that takes a life. After all, when handed a shield and gun they don’t automatically receive perfection.

Speaking of accountability, it will be interesting to see if Big Mike’s step-father goes to jail for inciting to riot as when he repeatedly shouted for the crowd to “Burn this b**** down.” And how many looters and arsonists will spend any time in prison? How many of the “useful idiots” in other cities will go to jail for blocking traffic and causing general unrest?

Furthermore, all identified looters (undocumented shoppers) and arsonists should be required to reimburse the innocent store owners who had their lifetime of work destroyed by the thoughtless thugs parading as principled protesters.

Minister Louis Farrakhan has many opportunities to make a fool of himself and he never misses a one. This was evident when the bellicose, boisterous and bizarre leader of the Nation of Islam made many Klan fanatics look like Pee Wee Herman. Louis spoke at Morgan State University on Nov. 29 and ranted and raved as he frothed at the mouth about the non-indictment of Officer Wilson. Without taking time to wipe the foam from his mouth, the black “minister” yelled, “We’ll tear this g** d*** country apart!” He opined that violence was justified as a result of the non-indictment of Wilson. The crowd roared its approval!

The invitation of Farrakhan by the university and the support of the superficial student body reveal much about this nation. Farrakhan also teaches that the Ebola virus was invented to kill off all black people! It is astounding that anyone would listen to that jerk. And for any allegedly responsible institution or group to give him a platform is beyond the pale.

Farrakhan went on to say that white people will only listen to the concerns of black people when more violence is perpetrated against whites by blacks. Did I mention that he is a minister?

The black “minister” then advised the students to teach their children to throw Molotov cocktails as he imitated the throwing of a cocktail. Hey, wasn’t there one courageous student present willing to stand up and challenge the religious thug? What about some professors or administrators? Surely some of them had a modicum of character and were willing to call him out and criticize his extremism. None. And thus far, no remorse, regret, or repentance by the administration for their obvious blunder in giving Louis a platform to express his hatred, humbuggery, and hypocrisy. Shouldn’t Farrakhan be charged with inciting to riot?

So, will any of the above high profile people be held accountable with jail time or financial accountable? Don’t count on it. You see, while everyone in America is equal, some are more equal than others. That’s especially true if you are a liberal black, and in spades if you are courageous enough to come out of the closet.

The New York Times reached the highest level of irresponsibility or the lowest level of villainy when they published the street where Wilson lives, and the suburb. They did that knowing that protesters had demanded Wilson’s death! Slate even published a photo of his home. The Washington Post and CNN also revealed Wilson’s address.CNN and these leftist publications often lecture others regarding journalistic values, decency, etc., but they will not go to jail or pay a fine, but maybe decent people will cancel subscriptions and refuse to patronize them in any way.

If harm comes to Wilson or his pregnant wife, the onus falls at the front door of each of the above media outlets. No, they won’t go to jail or pay a fine, but everyone knows them to be scum who pander to the left and condemn anyone on the right.

And we all know them to be incompetent, irresponsible, and immoral media outlets who are in bed with Obama, Holder, Nixon, Sharpton, ad nauseam.

They really should be in jail together!

In Case You Missed It:  Swalwell Plays Ridiculous Recording of Man with Fake Southern Accent ‘Threatening to Kill His Three Children’ – And No One is Buying It (AUDIO)
Posted in Tyranny and tagged Eric Holder, Jackson, Leftists, Obama, Racism, Riots.

By Matthew Vadum   —FrontPageMag More proof has emerged that President Obama is using the IRS as a weapon against his...