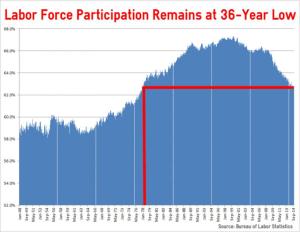 The labor force participation rate remained at a 36-year low of 62.8 percent in November, according to the Bureau of Labor Statistics.
The participation rate, which is the percentage of the civilian noninstitutional population who participated in the labor force by either having a job during the month or actively seeking one, was 62.8 percent in November which matches the percentage since March 1978.
In November, according to BLS, the nation’s civilian noninstitutional population, consisting of all people 16 or older who were not in the military or an institution, reached 248,844,000. Of those, 156,397,000 participated in the labor force by either holding a job or actively seeking one.
The 156,397,000 who participated in the labor force was 62.8 percent of the 248,844,000 civilian noninsttutional population, which matches the 62.8 percent rate in April, May, June, August and October of 2014 as well as the participation rate in March of 1978. The participation rate hit its lowest level of 62.7 percent in September 2014.
Another 92,447,000 people did not participate in the labor force. These Americans did not have a job and were not actively trying to find one. When President Obama took office in January 2009, there were 80,529,000 Americans who were not participating in the office, which means that since then, 11,918,000 Americans have left the workforce.
Of the 156,397,000 who did participate in the labor force, 147,287,000 had a job, and 9,110,000 did not have a job but were actively seeking one -– making them the nation’s unemployed.
The 9,110,000 job seekers were 5.8 percent of the 156,397,000 Americans actively participating in the labor force during the month of November. Thus, the unemployment rate was 5.8 percent, the same as it was in October.
In Case You Missed It:  BREAKING: Maricopa County Supervisor Steve Chucri RESIGNS From Office After TGP Exposé : “There Was No Cover-Up, The Election Was Not Stolen. Biden Won.”
Posted in Financial and tagged Economy, Financial, Obamanomics, Recession, Unemployment, United Socialist States of America, US Citizen.

‘Not In My Name’: Islams Campaign of Disinformation and Deception

Muslims in Britain have started a campaign entitled #NotInMyName, referring to ISIS barbarisms in the Middle East. It can at...