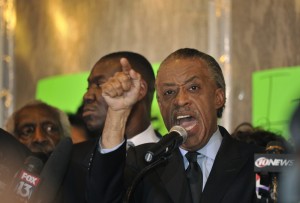 The conscience of the nation and turned the tide toward civil rights for all — have now been cheapened by today’s generation of black “leaders,” who act as if it is all just a matter of whose ox is gored.

Even in legal cases involving terrible crimes — the O.J. Simpson murder trial or the charges of gang rape against Duke University students — many black “leaders” and their followers have not waited for facts about who was guilty and who was not, but have immediately taken sides based on who was black and who was white.

Over the generations, black leaders have ranged from noble souls to shameless charlatans. After the success of the civil-rights insurgency, the latter have come into their own, gaining money, power, and fame by promoting racial attitudes and actions that are counterproductive to the interests of those they lead.

Martin Luther King preached change without violence, a true hero for the American people. A believer in all men are created equal.

Then you have Jackson, Sharpton and others that jump when ever there is a photo opportunity. Then need to get their faces printed front page, so they scream racism at any chance they get. But In my opinion i think the biggest perpetrator of increasing the racial divide is the Democrat Party. They keep blacks in their back pockets by screaming racism at every chance they get. If there is any race separation in a situation, they scream it loud and proud. Why would a political party do this you ask? Guaranteed votes, if they keep blacks down and feeling persecuted, then they can always blame the big bad Republican racist for there problems.

Sharpton, Jackson, the Democrats and all the rest need to stop their handling of racial situations for financial or political gains. Blacks need to stop, look and listen to what has really happened in all situations to see if it really is racial or just spome entity trying to better themselves. Yes racism exist, but it is everywhere and it is mostly just human nature. Humans have a tendency to hang out or group around people with the same likes and behaviors. Within the black race there is discrimination, dark skin, light skin, etc,.

Those found guilty of racial discrimination should be penalized by the courts without prejudice, and there should be a minimum sentence that courts can’t overstep. But I think the best thing that can be done for race relations is for all people, black, white, democrat, republican and any one else to stop blaming each other and to start looking for answers instead. Stop accusing and start digging for solutions instead. But that wouldn’t help the vote or the pocketbook, so I’m just dreaming here. Sorry! We need to think and use our heads, because in reality there is only one race, and that is humane!!!

In the the 60’s fight for civil rights, and it wasn’t the Democratic party leading the way, in fact they were the ones trying to keep blacks from equality. They were the party that the KKK was aligned with and the woman who established Planned Parenthood was unabashedly racist. Abortion was seen as a vehicle to reduce black populations. Today’s liberals actively attempt to rewrite the history of their party, and trashing conservatism is what they believe is the way. In other words, they are Grubering their constituency.

BIRMINGHAM, England — As a Sikh and second-generation Briton running a public school made up mostly of Muslim students, Balwant...