BERKELEY, California — Liberal Organizers of demonstrations against police killings told a crowd of hundreds before their march Monday evening that they should feel free to use violence if they so chose. 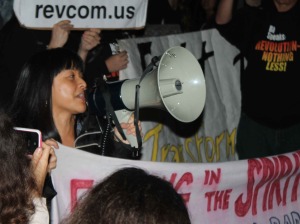 The leaders of a group called “By Any Means Necessary” told protestors who had gathered at 5:00 p.m. at the corner of Bancroft Way and Telegraph Ave.: “We do not condemn the forms of protest that are required to win justice.” They cited Dr. Martin Luther King, Jr.’s supposed reluctance to criticize the tactics of militant groups.

“A riot is the voice of the unheard!” one organizer said through a megaphone, to cheers.

(There were some objections of “Peaceful protest!”)

The tactical question of “violence versus non-violence,” she said, was less important than winning the struggle for justice against “racist killer cops.” She declined to tell demonstrators to be careful or avoid violence.

Rather, BAMN urged protesters to follow the lead of black demonstrators, whose bodies were at issue, along the route.

In Case You Missed It:  Carbon dioxide "has almost nothing to do with climate," says World Climate Declaration signatory
Posted in Freedoms and tagged California, Crime, Liberalism, Riots, US Citizen.

Natural weather patterns, not man-made global warming, are causing the historic drought parching California, says a study out Monday from...