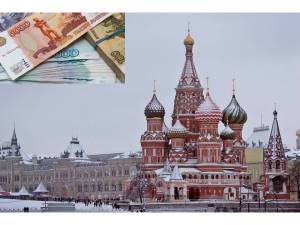 Russia matters. It mattered in 1998 when the shock waves from its debt default reverberated around the world. And it would matter again should the plunging oil price lead to economic collapse. That’s despite the fact that Russia is a massive land mass with a relatively small economy. It accounts for only 3% of global GDP and it is dominated by an energy sector that is responsible for 70% of exports.

To an extent, the structure of Russia’s economy should mitigate contagion risks. Lacking a modern manufacturing sector, it is not vital for global supply chains and, in theory, any other energy producer could make good the disruption to oil and gas supplies in the event of a deep and damaging recession.

But there are at least five ways in which a crisis for Russia could spread. Russia’s immediate problems have been caused by the sharp drop in the price of crude and it is not the only one to be suffering. Venezuela and Iran are finding it hard to cope with oil down at $70 a barrel. If Russia goes, it will be a case of: who’s next?

Second, Russia still has close economic links with eastern Europe, so a collapse would have serious consequences for countries such as Poland and an already imploding Ukraine. Western Europe, too, would be affected if for any reason gas supplies through Russia’s pipeline were cut off.

Third, confidence would be hit. Germany’s weak economic performance since the spring can, in part, be attributed to the gloomier economic mood. The slowdown in the rest of the eurozone has probably had a bigger impact on German activity but the tension between Moscow and Kiev has certainly not helped. Russia might be enough to tip Germany into recession, which in turn would be enough to ensure that the European Central Bank began a quantitative easing programme. 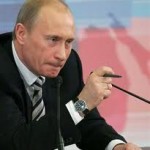 Fourth, nobody is quite sure how Vladimir Putin, pictured, would respond to the most challenging economic circumstances since 1998. Any confidence effects from an economic crisis would be exacerbated by the knowledge that Russia is controlled by a president able to make felt his country’s still considerable geo-political and military clout.

Finally, the assumption is that financial market exposure to Russia is relatively limited given that overseas banks had $209bn (£134bn) of loans to Russia when sanctions were imposed in March. On the face of it, western investors do not look all that vulnerable and have had time to get their money out. But that was also the assumption in 1998, when Barclays had to set aside £250m to cover its Russian losses. Financial trades are now so complex and leveraged, it is impossible to know for sure how big losses might be this time.

Powerful! Are we Living 1933 All Over Again?