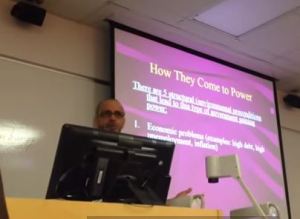 An article appeared in the Washington Times under the heading “Texas professor teaches students tea party akin to Nazi party.” A psychology professor (named Armstrong) at South Texas College drew a direct comparison between the Tea Party of today and the Nazi Party in Germany during the 1920s and early 1930s. Here are a few of his words:

“In 1931, which was really interesting, the Nazis — people were kind of tired of them. They’ve been around since 1920, 11 years now. They’ve won seats — they’re like the tea party! That’s such a good example. … But in the sense of how they politically came to power, there’s a good analogy there. That eventually, people realized, ‘Oh these Nazis are a bunch of nuts [and] these tea party people are a bunch of nuts.’ I mean, the analogy really is a good analogy.”

The mind boggles, and not just at the wretched English. First of all, there can be little doubt that Professor Armstrong believes that his comparison is valid. Second, I doubt that his opinion represents an isolated occurrence of this kind of mental malady. Third, although he actually implored his students not to spread the word about his opinion, he has undoubtedly shared his assessment with others on prior occasions. And finally, the monumental stupidity of his idea completely escapes him. [Video at the bottom.]

Woe is our Republic! Among three hundred million citizens, it is not surprising to encounter some whose touch with reality is slim and who are willing to spread the poison that infects their souls. What is astonishing is that there are literally millions of Americans who would not be troubled at all by Professor Armstrong’s distorted view of reality. After all, only one student in the class rebelled at the Professor’s lunacy. Of course there may have been others in the class who objected – alongside too many who accepted the assessment as legitimate. But the fact that a college professor could freely, and without reprimand, spout this kind of offensive and incendiary nonsense speaks volumes about the sorry state of freedom in the United States today.

How have we come to this? The T.E.A. in Tea Party stands for taxed enough already. The movement arose in reaction to the wanton federal spending that exploded in the first year of the Obama administration. The fundamental tenets of the movement were and are:

Sounds just like Mein Kampf! That is what Professor Armstrong believes and what he would have his students believe. Unfortunately, his opinion is shared by far too many government officials, journalists, media types, public school teachers and, alas, college professors. Of course, they would reject the above four points as representative of the Tea Party’s objectives. They would assert – and in their madness – probably believe that the fundamental goals of Tea Party people look more like: 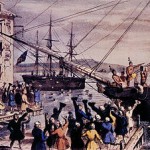 How can we possibly bridge the gap between the pure and wholesome motives of the Tea Party and the subversive, regressive interpretation of it by leftists like Professor Armstrong? It is not possible!

Therefore, we must recognize that there is a battle taking place between those who would restore the United States to its Constitutional roots and those who would overthrow it in favor of a statist, Euro-style social welfare state. There is no middle ground upon which the two sides can meet and establish some hybrid system. The hybrid system already exists and it is inexorably evolving into the form of government that the statists desire.

Either the Tea Party beliefs will triumph and America will revert to the land that once was and is envisioned to be again. Or we will continue the descent into the hell envisioned by Professor Armstrong. There is no other alternative.

The benighted professor is beyond help. But the students in his class are not. The rise of the Tea Party signaled a new effort by conservative/traditional Americans to take back their country. Professor Armstrong and his ilk are resisting that effort with all their might. One of the weapons they deploy in the battle is the distortion and demonization of the objectives of the Tea Party. Shall they succeed?

So Just How Stupid Are Liberals Anyway?

By Jim ONeill Seeing as how liberal stupidity is a given, the question becomes one of degree—just how stupid are liberals? ...