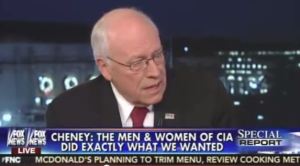 Former Vice President Dick Cheney today aggressively defended the CIA’s use of harsh interrogation techniques, pushing back against a report by Senate Democrats that said some tactics used to question detainees in the aftermath of the 9/11 terrorist attacks amounted to torture.

“Torture to me is an American citizen on his cell phone making a last call to his four young daughters shortly before he burns to death in the upper levels of the [World Trade Center] on 9/11,” Cheney said on NBC’s “Meet The Press,”  adding:

There’s this notion that there’s moral equivalence between what the terrorists did and what we do and that’s absolutely not true. We were very careful to stop short of torture. I’d do it again in a minute.

The report released Tuesday by the Senate Select Committee on Intelligence focuses on the CIA’s detention and interrogation program for terrorist suspects after the attacks on Sept. 11, 2001.

Senate Democrats who authored the report said some techniques, such as waterboarding, were torture and didn’t result in useful intelligence.

Their report contends that CIA officials misled officials in the administration of President George W. Bush — when Cheney was vice president — as well as members of Congress about the brutal nature of those techniques.

Cheney declined to criticize the CIA for another finding of the report — that the agency detained and interrogated some prisoners who turned out to have no connection to terrorism.

“Meet the Press” host Chuck Todd pressed Cheney — who last week called the report “a bunch of hooey” and “full of crap” — on the case of Gul Rahman, a man who froze to death after being chained to the floor of a CIA prison known as the Salt Pit in Afghanistan.

CIA records quoted in the Senate report say Rahman was detained by mistake, confused for someone else.

“Where are you going to draw the line, Chuck?” Cheney replied. “I have no problem as long as we achieve our objective.”

Some Republicans strongly criticized release of the report, saying it did not include interviews with relevant CIA personnel and endangers agents.

They also contend that “enhanced” interrogation techniques provided good intelligence, including information that helped lead to the finding and killing of Osama bin Laden in 2011. The report by Senate Democrats, though, says the techniques did not help lead to bin Laden and that key information on his whereabouts was in hand before the CIA began the detention program.

Sen. Ron Wyden, D-Ore., a member of the Intelligence Committee, said on “Meet the Press” that CIA staff and detainees were not interviewed for the report because, at the time, a Justice Department criminal investigation limited access to relevant CIA personnel.

Wyden disagreed with allegations that the report is partisan.

“Facts aren’t partisan,” Wyden said. “We reviewed 6 million pages of documents. There are a mountain of contradictions.”

“The vice president is obviously comfortable with [waterboarding],” Wyden said. “I consider it to be torture.”

Staff for Senate Intelligence Chairman Dianne Feinstein, D-Calif., used her Twitter account to send out messages in support of the report throughout the Sunday talk shows, as also occurred last week when the report came under fire.

CIA personnel “disturbed” by use of torture, “some to the point of tears and choking up.” Source: CIA email, page 44. #ReadTheReport

Everybody’s heard the numerous accounts on Ferguson. This lady, publishing on her page Honestly Speaking, gives one of the most...