After the usual impeccably choreographed all-night “negotiation,” delegates of almost 200 nations at the latest annual U.N. climate yak-fest – this time in Lima, Peru – reached the usual agreement not to agree on anything except that the process by which they profit must continue. 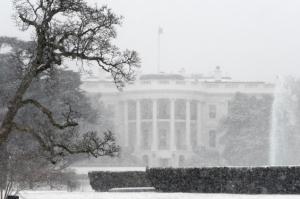 Not one delegate made any mention of the fact that every single one of the mad scientists’ predictions about the global warming and consequent planetary doom has failed to happen.

Notwithstanding record increases in CO2 concentration, global temperature has stubbornly failed to rise at all for 18 years, two months and counting.

The rate of warming in the 25 years since the first report on the subject in 1990 by the U.N.’s climate panel has been less than half what its useless computer models then predicted.

Sea level is not really rising at all. Global sea ice is at a record high extent. There have been fewer tornadoes in the U.S. in the past three years than since records began. The area of the world under drought has fallen for 30 years. There is no increase in the intensity, frequency or duration of flooding, nor in tropical cyclones, nor in hurricanes, nor in typhoons.

In short, the climate is behaving much as usual. As many records for extreme cold are being set as for extreme heat. Not so long ago, for the first time in recorded history, all 50 states of the U.S. – including Hawaii – had snow on the ground at least somewhere.

Not one of these inconvenient truths has been uttered by any of the national negotiating delegates. They are locked in a time warp, isolated from all reality. And the cost is staggering.

Even Australia – whose prime minister has rightly described catastrophic manmade global warming as “cr-p” – has donated $200 million to a U.N. slush fund, the “Green Climate Fund,” which will make the bureaucrats rich and the rest of us poor.

For and on behalf of the bankrupt United Kingdom, the Children’s Coalition has pledged $1.1 billion to the same slush fund.

The United States is spending hundreds of billions on making non-existent global warming go away.

As Ayn Rand foresaw in her towering philosophical novel, “Atlas Shrugged,”the “looters,” as she so aptly described the rapacious left, would strive and strive until they had robbed almost all of us of our ability to think.

Independent thought would be banned. Adherence to the party line would be mandatory. Anyone who thought for himself would become an outcast and would eventually be punished and, if possible, killed.

The truth is that the state-run schools are places not of thought but of indoctrination. Once upon a time, everyone who aspired to a higher education would be taught first grammar, then logic, then rhetoric, so that he could not be easily fooled.

Not anymore. However fancy and expensive the “education” received by the useless negotiators in Lima, not one of them has been taught how to think. Otherwise, surely someone would have broken ranks, firmly, and spoken up as I did at the Doha climate conference two years ago.

I pointed out, mildly, that there had been no global warming for 16 years.

Was there an outburst of spontaneous cheering at the news that there is no climate “crisis” after all? No. Instead, I was booed and jeered at and banned for life.

No one wants his gravy train tipped into the gulch. That’s why. Also, the delegates were afraid – afraid of someone who, in a dictatorship, was willing to speak out and tell the truth, knowing that there was a risk he could end up in jail.

In their consciences (for they still have them, deeply buried somewhere), they know the truth. They know that the money they are squandering to enrich the U.N. and its pampered Fauntleroys should really be spent on electrifying Africa, India and China. That would do more for the global environment than anything.

But no. They will not do the obvious until everything more profitable to them has been tried.

I have already noted in this column the paramount importance of ensuring the inclusion in the Paris Treaty next December of a get-out clause allowing any nation to resile from its obligations on giving a few months’ notice.

I now propose a further modest measure, which you may like to draw to the attention of your senators (without a two-thirds majority of whom no treaty can bind the United States).

All obligations under the Paris Treaty should lapse if at any time at least three of the five principal global-temperature datasets (HadCRUT, GISS, NCDC, RSS and UAH) show no global warming for at least 20 years.

At present, the RSS dataset shows no warming for 18 years and two months. The others would have shown no warming for 14 years, but the three terrestrial datasets have been tampered with this year to show more warming than has actually happened. However, there is a limit to the possibility of tampering, because the satellites of RSS and UAH are watching.

In the Scottish Parliament a couple of days ago, I asked three representatives of the “renewable-electricity” lobby what contingency plans they had if there was not a lot more global warming.

One looked me in the eye and said that his organization – a consultancy group – maintained a business-as-usual scenario in its modeling. The other two would not look me in the eye. Instead, each of them made a declaration of faith in the new religion and in the holy books of IPeCaC. I was sharp with the pair of them.

We must now make the unthinking governing class aware of its obligation to require the modelers to model the possibility of little or no further global warming. By this gentle step, we shall hope to bring our rulers back to sanity on this question. 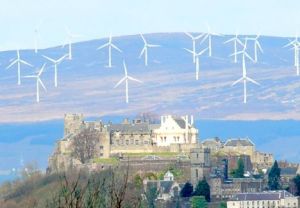 In the meantime, 60 percent of Scotland’s once-beautiful landscape now has wind farms on it. Tourism is likely to collapse if this goes on. Even in my beloved Rannoch, which has been spared the attentions of the racketeers so far, there will soon be windmills many hundreds of feet high.

I have told the chairman of the Renewables Committee of the Scottish Parliament that I should like to address it and let it hear the other side of the case. He did not seem keen. For our biggest problem from now on will be to convince the global governing class to admit it was wrong and change its mind, before any more trillions are squandered.

And that won’t be easy. For governments can never be wrong, and global tyranny – which is what we’ll get if we don’t look sharp in the next 12 months – will always have the power to force us to accept that it is right, whether we like it or not.

Freedom is our birthright. The forthcoming climate treaty – if the failed Copenhagen draft of five years ago is any guide – may yet prove a greater threat to liberty than fascism or communism. For it is the same threat writ global, albeit with the jackboots and guns very carefully hidden – for now.

MONTPELIER, Vt. — Gov. Peter Shumlin announced this week he has called off his plans for single-payer health care in Vermont...