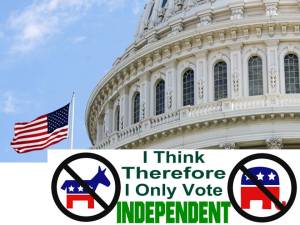 For many years average Americans, regardless of color, gender, national origin, religious affiliation (or lack of any religion), level of formal education or any other cultural identity have despised Democrat politicians more than Republican politicians.

Why would this be so?  Largely it can be assumed that Republicans have had a much better track record of hiding their elitism than Democrats have.  Professor Gruber recently provided evidence of this elitism by simply stating that those self-same average Americans are “stupid”.  Kind of hard not to despise such creatures.

But, in all fairness, we should all recognize that Republican politicians are working hard to reduce the lead that Democrats hold in this arena.  They might even gain the upper hand in the competition to become the most despised political party in the nation.  At least it appears so.

That sounds alarmingly similar to listening to our current President telling us how phenomenally brilliant he is, and that he is (in his own opinion, of course) the second best President that has ever held that office.  There is nearly no doubt that Barack Obama would have told the average American that he was in actuality the best, but listed himself as second best to show that he was very, very humble as well.

But since Mr. Obama will be leaving the White House in January 2017, some average Americans might be concerned that Republicans will surge to the lead of the “Utterly Despised” championship competition.  This should not trouble anyone for two (or depending on how it is counted) or three reasons.

First, if another Democrat is elected to succeed Barack Obama, there is a high likelihood of the trophy for being the more despised party being retained by any of three Democrat candidates:  Hillary Clinton, Elizabeth Warren or (hold on to something here) Michelle Obama.

Close behind those three, but not close enough to be in the top tier of Democrat candidates, we should recognize Joe Biden as at least a contender.

And far back in the pack of Democrat candidates, but in terms of generating an endless amount of detestation by just being alive, Harry Reid is a candidate that can’t be discounted completely.

Do Republicans have anyone in their slate of candidates measure up to that small sampling?  Oh, yes!

Just like the Gruber tendency to view average Americans as stupid people, and act as if we can’t possibly think as clearly as they themselves do, Jeb Bush has announced that he thinks that we should just accept that he is so smart that his opinion of the Common Core® educational system easily trumps our own.  The Common Core®program is based on how superior both Democrat and Republican politicians view themselves to be.  It is also based on how much both sets of politicians need to insure that stupidity remains in place, or is even enhanced by the Common Core® program.  Reducing the quality of the education that is given to Americans was planned to insure that “average Americans” remain educationally crippled.

In terms of emulating Barack Obama, and approaching the current president’s abilities in terms of sickening average Americans by demonstrating an astonishing level of hubris, there are several first term Republican senators who operate under the delusion that they are far and away superior to other potential Republican presidential candidates who are not based in Washington, D.C. but are merely state governors.  The big difference between Senators and Governors is that Governors have to actually make something happen within their respective state while Senators have to actually spend their time making speeches that not even other Senators listen to.

Why would Democrats and Republicans share that aim?  Perhaps it’s because they both read the following that was written by H.L. Menken:

The most dangerous man, to any government, is the man who is able to think things out for himself, without regard to the prevailing superstitions and taboos. Almost invariably he comes to the conclusion that the government he lives under is dishonest, insane and intolerable, and so, if he is romantic, he tries to change it. And if he is not romantic personally, he is apt to spread discontent among those who are.

Thinking for ourselves is absolutely terrifying to professional politicians of either party.  Thinking for ourselves, we will (if we haven’t already) discover that the current government, under the Democrats OR the Republicans, is one that actually is dishonest, insane and intolerable.  It seems that the discontent has already arrived.  And the demands for change to that government have already started.

Anything that might change the power structure is bound to be fought by both Democrats and Republicans, using any sleazy, underhanded and destructive means that can be concocted.

Is there anything else that needs to be seen to understand why BOTH political parties are despised?

Obama May Be Linked to Jihad Child Massacre in Pakistan

For months Americans have railed against Obama's release of the very worst Islamic terrorists (including many senior commanders) from Gitmo....