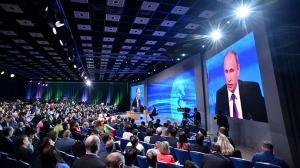 Could President Obama speak in front of hundreds of journalists for over three hours, unscripted and without a teleprompter? Highly doubtful.

How about Hillary? Can Mrs. Clinton take on the local and international press in an honest, nothing off limits, press Q & A….once again for over three hours and no teleprompter to assist. No chance.

Cameron, Hollande, Merkel…no way. European leaders are puppets to US policy and could probably not even string together thirty minutes of independent thought, let alone three hours of live debate.

What we saw today, for the 10th time, is about as transparent as any world leader can get…and western man stream media hates Putin, and Russia for this.

Putin’s tenth annual press conference format, length, and total transparency are all the facts any sane, brain functioning human being needs in order to easily deduce that all the western leader rants and main stream media propaganda about Russian aggression, Hitler comparisons, and dictator aspirations are all flat out lies.

Their is not one dictator on the planet, not one ruler alive today, not one President or Prime Minister in power, who has the balls and guts to sit in front of so many local and international journalists and answer every single question thrown at him or her with just a pen and paper handy.

Putin took questions from Ukrainian journalists, the BBC, Reuters, FT…just about every news outlet that crudely crucifies him on a daily basis, he engaged with in an open and honest debate in front of the whole entire world to see.

Nothing was hidden, and man was it refreshing to watch. If only my President was this open and forthcoming.

What we saw today was exactly why America, Europe, and the entire main stream media cabal despises Vladimir Putin.

The last thing any of the western nations want is transparency and public debate. They prefer to operate in the shadows, keep their citizens fully zombified.  They would never expose their leaders to unscripted events like this tenth annual press conference.

The closest thing western countries have to what we saw today in Moscow is Jen Psaki’s State Department press briefings, which are more stand up comedy, than intelligent discussion.

The west can hate on Putin all they want…until I see Obama, Cameron, or Merkel pull off what this man just did (for the tenth consecutive year in a row) then step off. ‘Haters gonna hate.’

In Case You Missed It:  CRYPTO CARNAGE and market mayhem foreshadowing the “mother of all collapses” to come
Posted in Freedoms and tagged Eastern Europe, Freedom, media, Russia, Vladimir Putin.