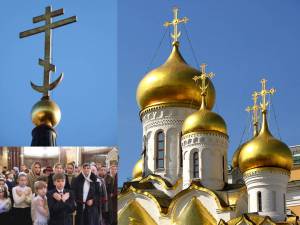 The Christian Orthodox cross is over an Islamic moon to symbolize how Orthodox conquered Islam. The symbolism represents the victory of the Cross — that is, Christianity — over Islam.

The Crusade continues, and will only grow…

The city of Moscow has now decreed that there will be no new mosques built, and has now put a ban on the construction of any one of those houses of heresy, and this of course demands our emulation.

The mayor of Moscow, Sergei Sobyanin, has declared emphatically:

No new building permits will be issued. I think that’s enough mosques for Moscow.

On a radio show Sobyanin sternly made it clear on the religious and cultural tensions arising between traditional Russians and Muslims:

Muscovites are becoming irritated by people who speak a different language, have different customs, and display aggressive behavior. This is not a purely ethnic issue, but it is connected with some ethnic characteristics

The heretic unitarian Muslims of course are on the protest against the rightful Christian supremacy that Russia is gradually establishing. Rushan Abbyasov, of Russian Council of Muftis, vehemently frothing with heretical poison, said:

One 58-year-old bearded Russian man named Oleg Smirnov, burning with noble and apostolic zeal, angrily exclaimed in a march for Christian supremacy, these words on the Muslims in Russia:

What are they trying to do? Show their strength? …We’re supposed to outnumber them on our own land.

In the same march, the crowd went past the Christ the Savior Cathedral, as people wore shirts on which were written these beautiful words: “Orthodoxy or death”.

Leonid Simonovich-Nikshich, an Orthodox Christian, made a declaration in agreement with what I have been saying for so long:

I am against the idea of tolerance and political correctness – the Bible makes no mention of tolerance.

And at reading such news, I am elated at seeing the apostolic zeal of the Russian people, how they have arisen from the abyss of atheism, to the glory of orthodoxy. And as I am uplifted with hope on the aspiring restoration of glorious Christendom, I cannot help but laugh remembering what foolishness Joel Rosenberg spouted talking to the heretic Glenn Beck, speaking against the Russian Orthodox Church and Putin as being like Gog in the Bible. I remember Beck’s empty words:

Gog and Magog. Gog is a guy who`s a really bad guy, who figures into Bible prophesy at the end of days. He`s from Russia. Is Putin possibly Gog? And what is he doing? What`s — what`s happening with religion in Russia now?

But in the midst of such hollow reasoning, I am filled with hope as to what is in the end of this tunnel of darkness, and this cave of deception, and I look past the clouds of vain popularities, and gaze upward to the eternal Heaven, from where saints receive their zeal and pure zealotry, their envisioning of Christendom’s pillars being looked upon after so much neglect, and their determination to establish the Cross over the black clouds of evil and sinister doctrines, of tyranny and falsehood.

Christ took up His whip to drive out the thieves in the Temple, and now that we, the Christians, are each a temple to God, we must purge the world of those who would wish harm and destruction on these living sanctuaries of eternal law.

And if we are to fight against Islam, we must help rescue the saints who are being butchered right now. DONATE NOW TO SAVE CHRISTIAN LIVES.

This protest of the Russians, and the various Christian militias which have come into the Holy War against Jihad, is only a sign of the coming great crusade that will erupt in the future. People must understand that the Orthodox Church, and the Catholic Church, has a very long history of fighting Islam. The Turks stole the Hagia Sofia Church in Constantinople, and the Russians, and all Orthodox Christians, have never forgotten this horrible event. The Orthodox will rise up against the Muslims, especially Turkey, to take back the Hagia Sofia.

As the Church becomes triumphant, in lands like Russia, the Philippines, Central Africa, Angola, and other lands, laws of intolerance toward Islam, and other heretics like the sodomites, will arise and intensify; the saints will pay no attention to the clamor of the modern mob, but instead they will only grow stronger, and even if death touches them will they still live, only in greater glory as martyrs in Paradise.

As the ultimate day of our hope eclipses the coming darkness that will persecute the saints, the people of God will be of those armies, sent to destroy “those murderers” (Matthew 22:7) who war against the Holy Cross, “and demolish all their high places.” (Numbers 33:52)

Pray that these laws against Islam only grow stronger, and that orthodoxy dominates heresy.

For those, like myself, who are tired of weak Christians and empty church sermons, I have set up a two-disk DVD set, of four hours of my lectures on what true Christianity is about, how our Faith is here not to be weak, but to war against evil, and how for most of the Church’s history, Christians have been aggressive and militant against Islam. GET A COPY OF THIS TODAY.

Sharpton Should Be Charged For Inciting Violence

By Dr. Orly Taitz, ESQ   During Sharpton rally people were chanting “what do we want?"   "Kill the cops."...