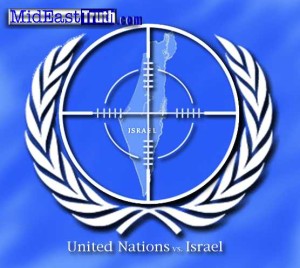 The right of Israel to exist as a nation was officially recognized by the United Nations on November 29, 1947 when it adopted Resolution 181 favoring the partition of the area claimed by the Zionist movement. The resident Arabs refused to accept the land set aside for a “Palestinian” state.

The British “mandate” of the area dated from the Versailles Treaty in 1919. Previously the Balfour Declaration was issued by the British government, favoring the establishment of a Jewish national home in what was then referred to as Palestine.

In 1946 following World War Two and in the wake of the Nazi Holocaust that killed six million Jews in Europe President Truman announced his support for the creation of a Jewish state. Throughout 1947 the United Nations Special Commission on Palestine had examined the issues involved and recommended the partition of Palestine into a Jewish and an Arab state.

The Arabs, then and now never ceased to oppose the existence of a Jewish state. To have a state of their own would require acknowledging Israel and that is why, to this day, there is no Palestinian state, nor ever was one.

In the wake of several Jewish revolts against the Roman Empire, Emperor Hadrian changed the name of Judea, Samaria and the Galilea to “Syria Palaestina” and the name of Jerusalem to “Aelia Capitolina.” The name change did nothing to eliminate Israel whose restoration remained an active dream for two millennia.

Now, having refused to come to any agreement with Israel despite years of negotiations and the Israeli withdrawal from Gaza to give the Palestinians living space in addition to an area in the West Bank, the Arab League is turning to the United Nations.

In the years since the 1947 resolution the U.N. has long engaged in anti-Israel activities. As Anne Bayefskywrote in the Jerusalem Post, “From November 24, 2014 until December 5, 2014, the UN human rights headquarters in Geneva mounted a public exhibit that was pure incitement. UN-driven anti-Semitism that takes the form of seeking to demonize, disable and ultimately destroy the Jewish state.”

Solidarity Day marks the adoption by the General Assembly on November 29, 1947 of the resolution that approved the partitioning of Palestine into an Arab and a Jewish state.” It was rejected by Arab states. “Thus,” wrote Ms. Bayefsky, “the Arab war to deny Israel’s right to exist began.”

The day following the Fatah (formerly the Palestinian Liberation Organization) announcement of its intent to seek a U.N. resolution, U.S. Secretary of State John Kerry met with a delegation from the Arab League to discuss the resolution that sets a timeline for an Israeli withdrawal to its pre-1967 borders. Indeed, they want to declare East Jerusalem as the Palestinian capital and want the assurance that “refugees” could “return”. The Obama administration has been the first to break with the long tradition of good will and solidarity that has existed between the U.S. and Israel.

As Rabbi Aryah Spero noted in a December 17 CNS News commentary, “Despite the partnership between the terrorist organizations Hamas and Fatah (the new name for Arafat’s PLO) some European nations are demanding that Israel immediately accede to the Hamas/Fatah demands or they will proceed in the U.N. to declare a Palestinian State and impose on Israel conditions that will not only strip her of her capital, Jerusalem, but place Israelis in instant jeopardy from rockets launched against her from this newly declared state abutting Israel. Like Gaza before, this newest Palestinian state will become a terrorist state and a proxy of Iran.”

European anti-Semitism is steeped in centuries of enmity and it is reasserting itself again within the living memory of the Nazi Holocaust that sought to kill every Jew in Europe. U.S. pressure is a major departure from decades of support for Israel. At the same time President Obama has lifted sanctions against Iran, giving it more time to develop nuclear weapons he has been threatening sanctions against Israel if it continues to permit the construction of housing in Jerusalem.

The Arab demand that it is the heir to “Palestine” and that Jerusalem is a holy city is absurd. As Rabbi Spero notes, “Unlike the Jewish Bible that mentions Jerusalem over 700 times, the Koran never mentions Jerusalem, even once. Jerusalem is simply a location they conquered and has become, as with other places, a symbol of Islamic power and control over Judaism and Christianity.” By this thinking, the Arabs should demand the return of Spain which they had also conquered.

In sum, the Arab League, Europe, and Obama’s U.S. policy want Israel to accept terms that amount to suicide.

That is not going to happen. The months and years ahead will be no less filled with the kind of turmoil and threats that Israel has lived with since it declared its independence in 1948. A world that turns its back on Israel is asking for its own apocalyptic destruction.

In Case You Missed It:  Get Ready for the Economic Collapse
Posted in Israel and tagged Anti-Semitism, Europe, Holocaust, Israel, Middle East, United Nations.

By Ed Lasky Anyone else find this disgraceful and immoral? Al Sharpton has a sordid history. First of all, though...