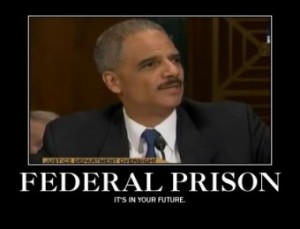 In case it has escaped your attention, you and YOUR PEOPLE, including Barack Obama, Al Sharpton, Mayor de Blasio and most members of the Democrat Party, have allowed yourselves to become agents of hatred and racial enmity of such intensity as to threaten the general peace and well being of the American people.

Mr. Holder, you have been vested with a position of extraordinary power and authority in American government. As such, you have a sacred responsibility to all Americans….not just people who share your ethnicity and or political views.

Unfortunately, in the charged racial environment that Americans are confronted with on a daily basis, your rhetoric and actions indicate a decided bias in favor of YOUR PEOPLE, and against the interests of other Americans whom are not people of color.

Your bias against law enforcement officials is particularly distressing when it stokes the fires of hatred against police.

The assassination of NYPD Officers Rafael Ramos and Wenjian Liu in New York City is, it seems, partially attributable to the reckless rhetoric and actions by the DOJ which tears down and decimates respect for the rule of law AND for the men and women who put their lives on the line each and every day.

In short, Mr. Holder, you and YOUR PEOPLE are out of control and need to be reigned in for their own good as well as the good of the entire community!

Trusting you to do the right thing!

In Case You Missed It:  Explosive! Public health data: 80% of COVID-19 deaths in August were vaccinated people
Posted in Freedoms.

By John W. Lillpop In 2008, presidential candidate Barack Obama made it clear that extreme action was an option in...