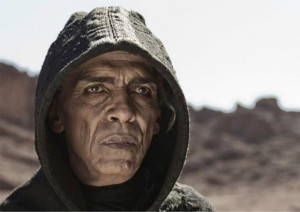 In 2008, presidential candidate Barack Obama made it clear that extreme action was an option in his campaign against Republicans, “If they bring a knife to the fight, we bring a gun,” Obama said at a fundraiser in Philadelphia.”

Over the past six years, Obama has used the bully pulpit of the US Presidency to divide the American people on the basis of race, wealth, age, and political persuasion in order to advance his Marxist agenda and personal political objectives.

Indeed, the man who promised to usher in a “post-racial” era in America has:

( )Partially justified recent protests and riots in the wake of controversial grand jury decisions by referring to a “Legacy of Racial Discrimination”;

( )Accused police of “acting stupidly” in the arrest of African-American Harvard professor Henry Louis Gates Jr., even while acknowledging that he (Obama) was not aware of all of the facts involved;

( )Met privately with the notorious race baiting antagonist, Al Sharpton, in the Oval Office on numerous occasions; and

( )Generally sought to stoke the flames of racial unrest, rather than seeking moderation and calm.

Given the tone and tenor of the rhetoric coming from the Oval Office, is it any wonder that race relations have deteriorated significantly since Barack Obama took office?

Is it any wonder that Ismaaiyl Brinsley, the black racist who executed two cops in New York City on Saturday, wrote in an Instagram post, “I’m putting wings on pigs today. They take 1 of ours, let’s take 2 of theirs”?

The big question: Can America avoid anarchy and total civil war as long as Barack Obama remains in office? Can we survive two more years of this divisive, anti-American politician who clearly loathes white people, the US Constitution, and the Rule of Law?

By John W. Lillpop Pity poor Al Sharpton! The “Reverend” is being personally subjected to the sort of wild, nonsensical...