The Muslim NYPD cop killer Ismaaiyl Abdullah Brinsley worked for a Muslim Brotherhood front group, according to his Facebook page.

GotNews.com has confirmed and exclusively discovered that Brinsley went by another name — Ismaaiyl Abdullah-Muhammad — and that he worked for the Islamic Society of North America.

The Islamic Society of North America is a Muslim Brotherhood front group that was described as an unindicted co-conspirator by the Justice Department in the 2007 Holy Land terror cases.

Brinsley a.k.a. Muhammad’s Facebook page includes liking pages like “I love Islam” and “I Have To Be More Philosophical, About My Life.”

Brinsley a.k.a. Muhammad’s terror attack recall an earlier hatchet attack against the NYPD by a Muslim fanatic in October of this year.

GotNews.com has already established that Brinsley’s past brushes with the law and hatred of the police come long before the controversial deaths of Eric Garner and Michael Brown. 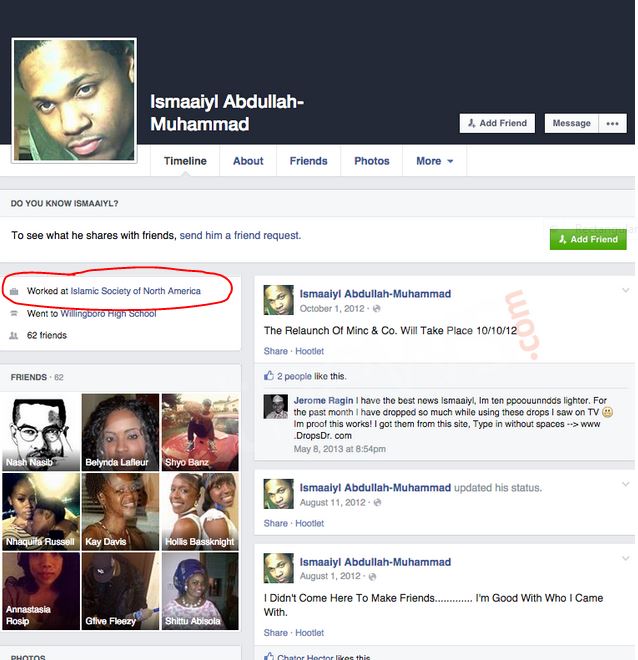 This new revelation, taken with this Koranic passage from Brinsley’s other Facebook page, destroy the narrative that Brinsley a.k.a. Muhammad was troubled and a depressed young man. In fact, he wanted to kill cops and he did just that.

“His [attempted] killing of his ex-girlfriend is entirely consistent with an honor killing,” says John Cardillo, a former NYPD police officer who investigated terror cells in New York.

ISNA’s political action committee was founded by Abdurahman Alamoudi, who is currently in prison on terrorism charges:

In 2005, the Treasury Dept identified Alamoudi as one of the biggest fundraisers for Al-Qaeda in North America.

During the trial, the federal judge hearing the case ruled there was “ample evidence” that ISNA conspired to support Hamas, a terror group that opposes Israel.

GotNews.com has already reported on how Brinsley a.k.a. Muhammad’s sister also hates Israel.

Gotnews.com reached out to the Islamic Society of North America. We will update this post if they respond.

Note: We will have a lot more on this…

Clarification: When we spoke with Cardillo it was strongly believed that the Muslim cop killer’s girlfriend was dead. We have corrected it above.

Study: Religious People Much Happier than Others

by THOMAS D. WILLIAMS, PH.D A strong correlation exists between religiosity and personal happiness, according to a new study by...