by Moshe Phillips and Benyamin Korn 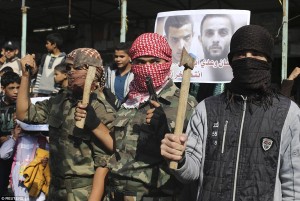 Masked Palestinians hold axes and a gun as they celebrate the massacre of four Jewish worshipers.

In most parts of the world, it’s not easy to find a major issue on which 80% of the population agrees. An election victory in the United States is considered a “landslide” if the winner receives more than about 60% of the vote. (Such as Richard Nixon winning 65% of the vote against George McGovern in the 1972 presidential race.)

But among Palestinian Arabs in Judea-Samaria (the West Bank) and Gaza, it turns out there is one issue on which there is more support than any other: randomly murdering Israeli Jews.

The Palestinian Center for Policy and Survey Research last week asked a sample of 1,270 Palestinian Arab adults in the territories what they thought of the recent wave of attacks in which Palestinians stabbed Israelis or ran them over with their cars. Fully 80% responded that they support such attacks.

Note that the respondents weren’t talking about theoretical future attacks. They were commenting on recent attacks which they know all about. Here is what they are endorsing:

– Ramming a car into a crowd at a train station in Jerusalem. The fatalities included a three-month old infant.

– Stabbing an unarmed young woman standing at a bus stop in Gush Etzion.

– Axing and machine-gunning four rabbis at prayer in a Jerusalem synagogue.

Could the 80% endorsement be a fluke? A one-time aberration? A momentary lapse in good judgment, spurred by recent tensions?

Hardly. There is a remarkable consistency in Palestinian public opinion. The same polling institution surveyed 1,200 Palestinians in the territories in late September and found that 80% support resuming the firing of rockets from Gaza into Israel.

Why is it that 80% of Palestinians embrace the brutal murder and terrorization of Israeli civilians?

First, there is the general brutality of Palestinian Arab society. Violence by relatives against women suspected of immorality, violence by Muslim extremists against Christian Arabs, violence by the Palestinian Authority regime against dissidents–it’s all commonplace in the territories. That makes it easier for the average citizen to see violence as acceptable.

Second, there is a sense that violence works. Kidnapping Israelis led to the release of thousands of Palestinian terrorists from prison. Decades of bombings and hijackings led to widespread international support for Palestinian statehood. The recent attacks in Jerusalem have led to calls to redivide the city (including, most recently, by U.S. Mideast envoy Martin Indyk).

Third, and perhaps most important, is the influence of anti-Israel and anti-Jewish incitement by the Palestinian leadership. Secretary of State John Kerry has correctly pointed out that the Jerusalem synagogue slaughter was, as he put it, “a pure result of incitement.” The constant declarations by Palestinian Authority chairman Mahmoud Abbas and other leaders praising terrorists as heroes and accusing Israel of desecrating Muslim religious places, have created an atmosphere in which support for murdering Jews has become the norm.

The normally alleged justification for Palestinian violence – a reaction to “the occupation” – does not stand up. Since 1995, over 95% of Judea and Samaria (West Bank) Palestinians have lived under the administration of the Palestinian Authority, which controls all aspects of Palestinian life except for visas and external security. And since 2005, Palestinians in Gaza have controlled even these.

The Oslo Accords were supposed to have put an end to all that. Palestinian leaders were supposed to educate the public to embrace peace. They promised to change the hearts and minds of average Palestinians, to raise a generation ready to live in peace with Israel. Instead, they decided to do exactly the opposite. And, as the new poll demonstrates, they succeeded.

A person claiming to be a member of a Mexican drug cartel said they have kidnapped a border agent and...