A Thousand Italians in Rome have been rioting in the streets and even clashing with the police in their fight against Muslim immigration in their country. 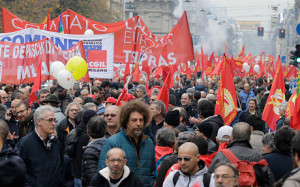 “Tension has never been so high in the neighbourhood. It’s been years that Tor Sapienza has been left by the Capital administration, hence recently the number of robberies and violence in the street have reached its peak.”

Ippoliti also spoke of how dangerous it is to walk the streets of Tor Sapienza because of the massive amount immigrants living in the neighborhood:

The tension is sky-high… For years this neighbourhood has been abandoned. You can’t leave the house at night and lately the violence and thefts have increased… A few days ago a girl was molested in the afternoon while taking her dog for a walk. The committee condemns the violence last night, but the local people are rightly exasperated. We need more security.

They are also extremely upset at how Muslims, and other immigrants, have been draining the system by taking welfare, while the average Italian is just struggling to get a normal occupation. As one Italian named Alvio said:

Why do they have to be taken care of? It’s me that needs taking care of! …Even God has abandoned us

But the violence really erupted after it was said that an Italian girl was raped by an immigrant (and I am assuming the rapist was Muslim). Alvio said of the immigrants:

They hang around in groups in the park in the evenings. They make a noise, they make a mess and they leave beer bottles all over the place. And there have been robberies.

About 250 Italians attacked the refugee center screaming words such as “dirty Arabs” and “disgusting Muslims.”

Shoebat.com recently did an interview with Italian Catholic activist Tommy Paccinotti, on the tensions going on in Italy with Muslims. He explained how with the increase of Muslim immigration in Italy, comes in increase in religion amongst Italian Catholics. He also spoke about how when he and other activists rallied against Islamic immigration in Rome, police forced them to disperse while Muslims nearby were allowed to conduct their own rally and scream “Death to the Pope!” and “A good Christian is a beheaded one!” You can watch that interview here:

In Case You Missed It:  Get Ready for the Economic Collapse
Posted in Terrorism and tagged Europe, Immigration, Italy, Muslims.

Obamacare: How Screwed Are You?

By Rodney Lee Conover ObamaCare was never about healthcare, the poor, insurance, or anything else. It’s about controlling the populace,...