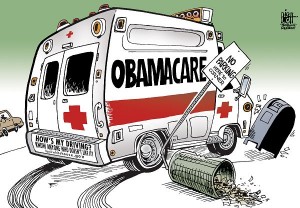 ObamaCare was never about healthcare, the poor, insurance, or anything else.

It’s about controlling the populace, paying off cronies, donors, supporters and expanding the size and authority of the central government.

You think they cared that no one could get on the website and actually sign up for ObamaCare before the 2012 election?

But since then, millions of Kool-aid drinking Americans figured out what a scam they’d been sold and the 2014 result was a resulting nightmare for Democrats and Barack Obama.

So far, nearly 12,000,000 words – that’s 12 meeellion (pinky to mouth) words have been written, published and are being implemented into the final ObamaCare regulations.

If that sounds like a lot, consider that the monstrous original Affordable Care Act was a paltry 380,000 words or so before it was bribed, cajoled, conned and finally hoaxed legislatively down our throats.

That means unelected bureaucrats, various lobbyists, corporate interests, union pinheads and other cronies looking to cash-in on the slush or get in on the massive cottage industry being paid billions to explain it all to businesses, hospitals, doctors, caregivers and average citizens who never asked for it in the first place – have themselves created a behemoth thirty times bigger than the original bill..

In other words, even if anyone did know what was in it, it’s now something completely different.

This is a blatant case of the Federal government taking over a huge portion of the private market with absolutely no regard to the separation of powers, oversight or any say so by the American people through their elected representatives.

This law is now something foisted upon citizens without their consent, their approval, their input, their knowledge or their Constitutional rights. This is an act of despotism which will affect the entire nation far beyond what we are witnessing right now.

Since the ACA was deemed to have passed Congress, rewritten and declared a tax by Justice Roberts, altered, parsed and carved up by Presidential fiat, had its many exemptions and waivers issued to the fortunate and filibustered against its funding; dozens of minions in various administration agencies have also cranked out over 100 final regulations on how this fraud will be implemented.

That’s the long way of saying you’re about to be subjugated. Think I’m paranoid?

Okay, riddle me this:

Since when does enforcement of a law require thirty times more words and regulations than the law itself?

The answer is when enforcement is the entire point of the law.

This is not about healthcare, insurance, the poor or anything else. It’s about controlling you.

For a hundred years, socialists have been trying to get at your healthcare in order to get at you. Google it, pal. Marx, Stalin, Hitler, Mao, Alinsky, Chavez, Wilson, FDR, Ted Kennedy, Hillary and when they saw a wrinkle in time where they had super-majorities they knew they would lose quickly, they struck.

Imagine the thrill of actually forcing socialist medicine upon the free and Capitalist-loving people of America? It must have been a dream come true.

And when they exempted themselves, their friends and benefactors I bet they had a good laugh.

The traitors who cast those votes against their own better judgement because they had been bribed, bullied or just swept up in their Party loyalty will not do well in the gulags when average Americans realize who they are..

Make no mistake – this is a massive money-grab – trillions of dollars will flow out of what was once the private sector into federal government coffers and it’s cronies, donors and supporter’s pockets.

Federal workers, consultants and insiders are setting up high-dollar firms which will extract billions from big business, guiding them through the complexities of these millions of words of purposeful confusion.

But most importantly, the Administration will have you by the short hairs. They’ll have your medical history and the ability to share it or exploit it when it suits them.

They can approve or deny you and your family of what you need in the most critical department – your well-being. Winners and losers will be so much easier to pick now that behavior can be linked directly to government administered health benefits. I haven’t even gotten to the evil part yet:

We’ve seen first hand this administration’s willingness to oppress a private citizen’s civil rights based on their political beliefs. Do you really think it’s not going to happen with ObamaCare?

If you believe suddenly this government will start playing by the rules you are naive to the point of stupidity, friendo. There will be rationing; there will be bureaucrats ruling on who gets what and why and when.

And there will be discretion based on politics. Lois Lerner will seem like a choir boy when this hits full stride. You’ll long for the days when all that ever happened was the NSA gathered your Facebook postings and Google searches, or you were audited because you were Herman Cain’s speech writer.

Did I say that out loud?

Need a heart transplant? Well, guess what? There’s only one heart available and someone else needs that heart too! Someone who didn’t download that news story critical of the administration? Someone who didn’t email the president of the local Tea Party chapter and ask how the rally was shaping up? Someone who donated to the correct causes? Someone in a union, who has a cousin in DC, who volunteered at an environmental event, who is a left-winger and you’re not? Well, guess what palpitation-breath? Sayonara!

Think I’m nuts? I would have too five years ago, but I’ve seen too much firsthand to think for a minute this bunch won’t do or say anything for power. Total control.

When they can sit in secret with who knows who and write millions of words of regulations that are automatically law and implemented into the lives of only the people they choose and not those they don’t, it’s tyranny, folks.

Where are the separation of powers? Where are the Republicans holding hearings into these Unconstitutional activities? When do the impeachment proceedings begin?

Friend me on Facebook – if you dare. No one turned away.

What Your Tweets Tell Us About the Year’s Biggest Stories

In the whirlwind of the daily news cycle, stories come and go abruptly, moving faster than ever before. But in...