It’s time that we finally admit it. The battle for Old Europe is over. The Gates of Vienna have finally been breached. Old Europe has been experiencing a tidal wave of violence and terror in recent years correlating to and in direct proportion with the growing influence of Muslims in the western part of the continent. Yesterday’s massacre in Paris by Muslims screaming “Allahuakbar” (what else?) represents a culmination of growing Muslim power and even dominance in France. Britain, Sweden, Belgium and the rest of the sorry lot are not too far behind. Today’s European Muslims have successfully accomplished what the Nazis could not accomplish in World War II. They have sown an irreversible dread into Europe and implanted a fascist-like Islamist seed that has taken firm root.

It is ironic that France has been the recent target of most of the violence. France of all the countries of Old Europe is one of Islam’s greatest appeasers. For all its official rhetoric, France has done precious little to stem the growing tide of Jew-hatred and anti-Israelism that has gripped that country. The sign of a sick and diseased country can be measured by its treatment of its Jews and by that paradigm, France’s condition is terminal. Mass emigration of French Jewry, prompted primarily by French Islamists, is met with muted response and inaction by French officials who appear either indifferent to their plight or at a loss to devise a coherent strategy to effectively deal with the phenomena.

In May 1967 France was the first Western power to unilaterally impose an arms embargo on Israel at a precarious time when Israel was facing existential threats from its Arab neighbors. From Iraq to Algeria, frenzied Arab mobs stoked by their respective venal governments burned effigies of Jews in the streets to chants of Itbach al-Yahud, “slaughter the Jews!” The world watched with feigned concern as hundreds of thousands of Arabs soldiers backed by modern Soviet T-55 tanks and Mig fighter jets converged on Israel’s borders. The French, who barely had time to shed the stench of their collaborationist Vichy past, chose to abandon and betray the Jewish State in a transparent effort to curry favor with the Muslim world. The French sold their morality for oil and a few Francs. 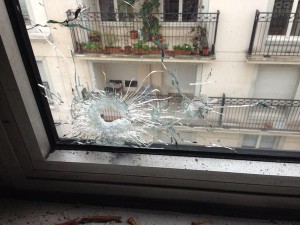 France’s duplicitous foreign policies when it came to appeasing two-bit Arab dictators only went from bad to worse.  They helped Saddam Hussein construct an atom bomb plant and supplied the tyrant with massive quantities of Mirage fighter jets, missiles, tanks and artillery. For those who need reminding, this is the same chap who paid lavish sums to the families of Palestinian homicide bombers, who threatened to “burn half of Israel” and employed chemical weapons against his own people.

The French really know how to pick ‘em. Successive French governments have developed a penchant for coddling up to the most vile Islamic dictators and terror sponsoring states. Close relationships were forged with Hafez Assad of Syria and arch terror chieftain Yasser Arafat, a despicable murderer who was always warmly greeted by adoring and fawning French officials.

Rather than fighting and combatting Islamic terrorists, the French have a nasty habit of paying them off. They released frozen Iranian assets in exchange for cessation of Iranian-backed terror attacks against France and paid Palestinian groups protection money in an effort to spare their commercial airliners from the scourge of Palestinian skyjackings.

France’s abominable foreign policy reared its ugly head yet again when on December 30, it backed a Palestinian resolution at the UN Security Council that imposed dictates on Israel, compelling the Jewish State to withdraw to pre-1967 borders – borders which Israel’s former UN ambassador, Abba Ebban, perceptively termed “Auschwitz lines“– without addressing Israel’s security needs and territorial claims. The one-sided resolution also gave implicit recognition to the notion that millions of “Palestinian refugees” would be allowed to flood Israel, effectively ending the Jewish character of the state.

To the leaders of France, composed of Neville Chamberlin lookalikes, adopting the Palestinian narrative and coddling up to the Mideast’s Muslim dictators, is good for business and insulates France against Islamic-inspired terror attacks. Yesterday’s barbaric Muslim massacre of French political satirists, journalists and policemen in Paris proves otherwise and should compel French leaders to reevaluate their foreign and liberal domestic policies. It should also serve as a wakeup call for the rest of Old Europe to do the same but something tells me that this will not occur and there will be no course correction.

We will hear from “moderate” French Muslim leaders who will rush to exercise the Muslim principle of Taqiyya and feign concern for the victims while condemning the actions of their coreligionists. This expression of faux sympathy will be enough to placate France’s leadership and their very forgiving multicultural allies. In a few weeks or perhaps months, all will return to “normal.” French Muslim Imams will continue to spew hatedirected against the “infidels” from the mosques. Violent anti-Israel, Jew-hating protests will resume in the streets of Paris and Marseilles and French officials will once again move to condemn Israel for committing some imaginary offense because it’s good for business. The Gates of Vienna have been breached.

In Case You Missed It:  Study: Over Half of Migrants and Refugees Are on American Taxpayer-Funded Welfare
Posted in Terrorism and tagged Europe, France, Immigration, Islam, Muslims, Political Correctness, Terrorism.

(Conservativepapers.com) The heinous murders of Charlie Hebdo employees in France the Islamic terrorist in bed with leftist politically correct morons.  The...