Cherif and Said Kouachi, the two Muslim suspects in the Charlie Hebdo massacre, were killed when French police raided a warehouse where the brothers were holding one person captive. A third suspected Muslim terrorist was killed by police at a Kosher grocery in Paris. Hostages at both locations were freed, but others are reportedly dead. 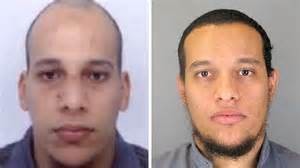 One of two Muslim terrorist that carried out the deadly shooting at a French satirical weekly met leading al Qaeda Muslim preacher Anwar al Awlaki during a stay in Yemen in 2011, a senior Yemeni intelligence source told Reuters on Friday.

U.S. born and web-savvy, Awlaki was seen as an influential Muslim and international recruiter to the al Qaeda movement and a prominent figure in Al Qaeda in the Arabian Peninsula (AQAP), the group’s most active affiliate. He was killed in September 2011 in a drone strike widely attributed to the CIA.

By John W. Lillpop The 7th Century demons that slaughtered 12 innocent folks in Paris are allegedly affiliated with Islamic...