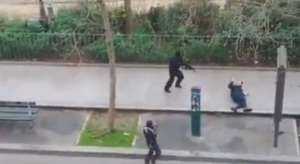 The 7th Century demons that slaughtered 12 innocent folks in Paris are allegedly affiliated with Islamic terrorist monsters known as Al-Quaeda.

That’s right—Al-Quaeda, the same monsters that our Muslim-smitten, insane president told us had been decimated!

Decimated? Look at the videos of these demons with their assault weapons and choreographed attack and get away strategies!

Because Barack Obama stupidly associates Islam with warm summer evenings and the righteous “call to evening prayer” rather than AK-47 wielding maniacs willing to kill in cold blood over a GD cartoon, the world remains vulnerable to outrageous acts of unspeakable barbarism from Al-Quaeda and its evolved evil known as ISIS.

And of course, our crazed president refused to identify the Paris killers as Islamic.

America needs to wake up and take the slaughter in Paris as a warning of things to come here unless we install a president who is capable of understanding the true nature and face of evil.

The clock is ticking and Islamic extremists are headed our way! America cannot survive with Barack Obama in power!