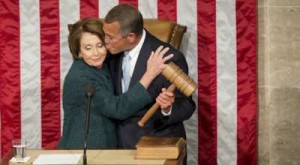 Republicans in the US House may have very well stabbed the party in the back with the finality of death after returning John Boehner as Speaker.

In the way of history, remember that dedicated conservatives worked feverishly throughout the year to make known the dangers posed by Barack Obama to not only the constitutional heritage of our nation but to our cultural and spiritual values as well.

The very essence of America was being attacked by a Marxist maniac who was committed to fundamentally transforming the nation by destroying the very concepts and institutions that made America great.

Far and wide, the message was delivered: Obama must be stopped and that can only happen by installing conservatives in congress.

Get out the vote campaigns, door-to-door visits, and all other conceivable means for getting the truth out were waged with the energy and passion of a people fighting for their very lives—-which we were!

The results of the grass roots efforts were astounding: The US Senate was captured and taken away from the unsteady hands of Harry Reid, and the majority in the US House was increased to further push Nancy Pelosi into the irrelevance of oblivion.

Victory was ours—-or so we thought.

Our jubilation turned to distress when John Bohener came back and immediately pushed a resolution which funded the government without touching ObamaCare or the illegal Obama decrees on immigration.

What the hell! Why did we even bother if John Boehner has joined forces with Barack Obama?

To the GOP: This “Boehner Boner” may spell the end of the Republican Party….and the end of America itself.

In Case You Missed It:  EVIDENCE: Covid plandemic was being schemed at least as far back as 9/11
Posted in Freedoms.

Twelve people were murdered Wednesday in a terrorist attack on the Charlie Hebdo satirical newspaper headquarters in France. Today, French...