The French writer and philosopher Voltaire, who spent most of his adult life outside Paris, where he had 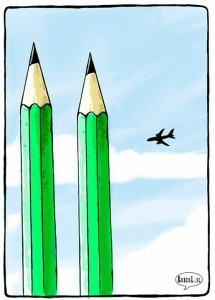 been persecuted for his ideas – is believed to have said, “I do not agree with what you say, but I will defend to the death your right to say it”

What is Democracy if there are limits to journalism?

Those in the West who proclaim the defense of democracy, freedom and should too Stand with Charlie Hebdo and the free to draw as they wish.

Free speech, no matter who might it offend, is a bedrock value of liberal democracy. An attack on journalists anywhere is an attack on civil society everywhere, make mo mistake about it!

Muslim terrorists try to affect people’s behavior through fear. That is their strategy—violence is just a tactic. The right response is reflexive: Don’t ever give in to people who try to intimidate you. Instead, straighten your civic backbone and push back in clear conscience. Insist on your right to live in freedom from fear.

For “Outrageous Government Scam of 2014,” it’s hard to compete with the news of the supersized public employee pensions in...