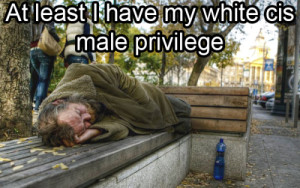 If one is going to describe an entire race of people (i.e., whites) with a derogatory term (i.e., “oppressive”), by definition one has made a racist statement, a race-based negative generalization. White privilege further fits the definition of a racist term because it neglects all of the experiences that are part of who someone is. The bigoted term doesn’t look at the individual but instead paints all whites with a broad racial brush and stereotypes whites according to the color of their skin.

Using the term white privilege is highly divisive. Think of replacing “white” with “black,” “Chinese” or “gay” privilege. The minute you throw around a racially polarizing term, you have created an atmosphere of divisiveness, which makes it very difficult for people to hear each other’s concerns. Put another way: 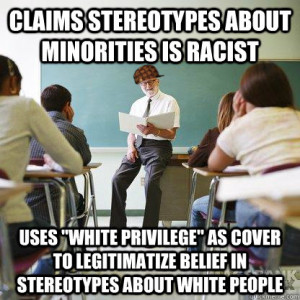 What white person would want to support a concept that describes her or him as a white-structural-racial-oppressor?

Third, you cannot use a wedge to bring two things together, it only goes to divide people. A wedge divides, always and by definition. From a practical perspective, “If you want the majority to come along, you have to show them what is in it for them. People don’t like to be accused, but they do want to be a part of building something meaningful.”

It’s the classic Marxist morality play in which the wealthy elite, fearful of insurrection by the poor people they mistreat, opt to divide and conquer. They offer special status to the white poor to enlist them in the subjugation of everyone else, with the ultimate goal of maintaining power.

Race was used as a political tool in the Middle Ages, as it was in Colonial America, and is today witht he left. Suddenly we believed we could know things about a person solely based on the color of their skin.

Since the 1980s we have moved away from the goal of a colorblind society towards the goal of valuing differences. This focus on difference reinforces racial pseudoscience and frankly gives cover to racists to openly practice racism as we are seeing today. Mainstream media is reporting on White Privileged, even the president speaks about it, the bigotry has gone mainstream. 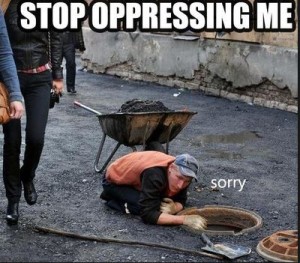 Today there are outlandish policies such as like Affirmative action that discriminates based on race, and the leftist bigots claim that its not racism. Racism is racism whether it is aimed against whites, blacks, or anyone else.

Affirmative action assumes your need for University admittance assistance based on the color of your skin, this policy assumes if your white you don’t need assistance, if you have a darker tone you do. It is discrimination plan and simple and violates the civil rights of those effected negatively by these laws.

Remember those WWJD bracelets that were so popular in the ’90s? Well, an expert at the Law Library of Congress...