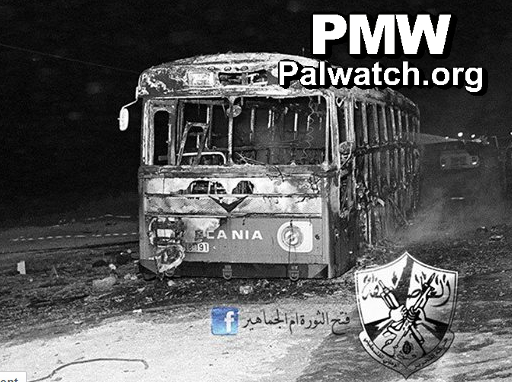 As part of Fatah’s celebration of the murders, Fatah posted the above picture of the burned-out bus in which dozens of civilians were murdered by bullets and hand grenades. The terror attack led by terrorist Dalal Mughrabi was the most lethal in Israel’s history, when terrorists in 1978 hijacked a bus and killed its passengers.

“Here Dalal [Mughrabi] raised the Palestinian flag at the front of the bus used by the heroes of Martyr (Shahid) Kamal Adwan’s group. They drove with 90 hostages inside it from Haifa to Tel Aviv, but the Zionistforces refused to negotiate with them. They fought a fierce battle that lasted from afternoon to evening on March 11, 1978.”

Fatah placed its logo on the photo of the bus – crossed rifles, and a grenade on top of a map representing “Palestine” that includes all of Israel.

Yesterday, Palestinian Media Watch documented Abbas’ terror-hypocrisy by showing that his official newspaper played a part in the glorification of 5 terrorists who recently killed a total of 10 Israelis, calling them “Martyrs of 2014.”

Abbas’ hypocrisy: Abbas participated in the anti-terror march in France, but the PA, PLO and Fatah continue to glorify terrorists who murdered Israeli civilians
5 terrorists who killed 10 Israelis are elevated as “Martyrs of 2014”
by Itamar Marcus and Nan Jacques Zilberdik

“Abbas condemned all terrorist actions that claim innocent lives, whether they are Christians, Jews, Muslims or followers of other religions, stressing the sacredness of human life.”

However, as Palestinian Media Watch has documented, the PA and Fatah continue to glorify acts of terror against Israeli civilians.

Just last week, 5 terrorists who recently killed  a total of 10 Israelis were included on a list of “Martyrs of 2014” who “ascended” to Heaven, published in the bi-weekly Al-Asima distributed with the official Palestinian Authority daily.

The terrorists on the list, who were called “Shahids” (Martyrs), which is the highest achievable status in Islam, and included the synagogue murderers who recently killed 5, 3 terrorists who killed 5 by running them over with cars and the terrorist who attempted to assassinate Rabbi Yehuda Glick. See descriptions of their attacks below.

Another article described the terrorists as having died while “carrying out Martyrdom-seeking (Istish’had) operations.”

Al-Asima lists as its “general supervisor” Othman Abu Gharbieh, who is a member of Fatah’s Central Committee and the Secretary General of the Popular National Conference of Jerusalem, the PLO institution that publishes this bi-weekly.

A few days ago, Palestinian Media Watch reported on an article in the same bi-weekly that glorified a terrorist who stabbed two soldiers and encouraged Palestinians to carry out similar attacks “against Zionists.”

The following are the examples of the PA glorifying the terrorist murderers in the PLO-published supplement to the official PA daily:

“The [PA’s] Islamic-Christian Council for Jerusalem and the Holy Places published its annual report for 2014, which documents the most prominent Israeli violations and attacks on Jerusalem, its holy places, citizens and buildings. The contents of the report are as follows: … Attacks on the residents of Jerusalem:
Over the course of this year, 15 Martyrs (Shahids) ascended [to Heaven] – 2 at the hands of the settler gangs, 8 wounded by enemy fire and 5 [killed after] carrying out Martyrdom-seeking (Istish’had) operations (i.e., terror attacks) in Jerusalem.”

“The number of Martyrs (Shahids) from Jerusalem has thus risen during 2014, to 15, 8 of whom ascended [to Heaven] after being wounded by occupation army fire – 2 by the settler gangs and 5 after carrying out self-sacrificing (Fida’i) operations (i.e., terror attacks) in the city.”
[Al-Asima, bi-weekly distributed with official PA daily, Jan. 5, 2015]

Headline: “The Martyrs (Shahids) of Jerusalem in 2014″
(Terrorists who killed Israeli civilians included on the list, -Ed.):

“Martyr (Shahid) Amar Al-Natsheh, who ascended [to Heaven] while preparing an explosive device in the Al-Salam neighborhood of the village of Anata in occupied Jerusalem on June 15, 2014.”

“In addition, the excavator Martyr, Martyr Muhammad Jaabis from the village of Jabal Mukkaber, ascended [to Heaven] this year. The occupation accused him of carrying out an operation (i.e., terror attack) which killed a rabbi and wounded others on Aug. 4, 2014.”

“Martyr Mutaz Hijazi from the neighborhood of Al-Thuri in occupied Jerusalem, who carried out the shooting operation against the Jewish extremist rabbi, Yehuda Glick, on the morning of Oct. 30, 2014.”

“Martyr Abd Al-Rahman Al-Shaloudi from the village of Silwan, south of the Al-Aqsa Mosque, who was killed by the occupation after carrying out a car operation (i.e., terror attack by running people over with a car) which killed 2 settlers and injured others on Oct. 22, 2014.”

“Martyr Ibrahim Al-Akari from the Shuafat refugee camp, who also carried out a car operation (i.e., terror attack by running people over with a car) that killed 3 settlers and injured others on Nov. 5, 2014.” (The terrorists murdered 2, -Ed.)

“The cousin Martyrs, Ghassan and Uday Abu Jamal, who carried out an attack with knives and axes in a Jewish institute (i.e., synagogue), killing 6 settlers and wounding dozens on Nov. 18, 2014.” (The terrorists murdered 4 worshippers and one police officer, -Ed.)

Amar Al-Natsheh – Palestinian man killed when the explosive device he was preparing exploded in the village of Anata in East Jerusalem on June 15, 2014.

Muhammad Jaabis carried out a terror attack in Jerusalem on Aug. 4, 2014, when he deliberately ran over and killed Avraham Walles with an excavator and injured 5 others when he flipped over a bus. Jaabis was shot and killed on the scene.

Mutaz Hijazi – Islamic Jihad member and released prisoner who attempted to assassinate Rabbi Yehuda Glick, a prominent activist working to assure rights for Jews to visit and pray on the Temple Mount, on Oct. 29, 2014. The assassination attempt took place following a conference on establishing times and places for Jews to pray on the Temple Mount. Glick was seriously wounded in the attack; Hijazi was killed soon afterwards when he opened fire on an Israeli police force that was attempting to arrest him.

Abd Al-Rahman Al-Shaloudi – On Oct. 22, 2014, Al-Shaloudi deliberately ran over people waiting at a light-rail station in Jerusalem with his car, killing three-month-old Israeli-American Haya Zissel-Brown and Karen Mosquera, 22, of Ecuador, and injuring 7 others. He was shot by police while attempting to flee, and later died of his wounds.

Ibrahim Al-Akari – Hamas terrorist from East Jerusalem who carried out a terror attack by car on Nov. 5, 2014, at a light-rail station in Jerusalem, killing 2 and injuring at least 13 others. He was shot and killed by Israeli police officers who arrived on the scene.

Jerusalem synagogue terror attack – On Nov. 18, 2014, two Arab terrorists,
Ghassan and Uday Abu Jamal from East Jerusalem, entered a synagogue in
Jerusalem and attacked worshippers with guns, knives and axes, killing 4 worshippers and a police officer. 7 people were injured, 3 of them seriously. The terrorists were killed in an exchange of fire with Israeli Security Forces that arrived on the scene.
In Case You Missed It:  9-11-2001 NEVER FORGET
Posted in Terrorism and tagged France, Islam, Israel, Jihad, Muslims, Palestinians, Terrorism.

In another attempt to explain away the Paris terrorist attack, CNN’s Religion Editor compared the situation Muslims may feel in...