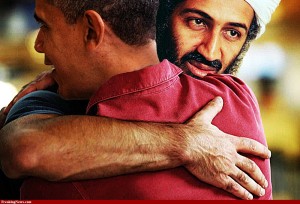 While 40 ‘world leaders’ were preening before cameras with linked-arms, during their highly flamboyant “Je suis Charlie!” march in Paris on Sunday, all five collared terrorist suspects had been released from custody by Parisienne authorities the night before.

Was world attention deliberately drawn to the world leaders who stole the “Je suis Charlie” show rather letting focus fall on French authorities having to own up to the trail having gone cold in the hunt for Islamic terrorists,  who slaughtered a total of 17 people, 12 at the satirical weekly newspaper, Charlie Hebdo , the cops outside hired to protect them,  and four others during the ensuing operation to apprehend the perpetrators holding them hostage during the takeover of the kosher Hyper Cacher supermarket?

There are other Hug a terrorist stories in the Paris terrorist attacks like the one about the Kouachi brothers allowing the man whose car was confiscated to get his dog before they raced off in his car.

Then there’s the latest one reported today by Britain’s Daily Mail how 40-year-old Charlie Hebdo journalist Sigolène Vinson revealed how she stared into the killer’s ‘big, soft, troubled eyes’ as he told her ‘have no fear we don’t kill women’.  (Daily Mail, Jan. 14, 2015)

Perhaps the biggest question of all about the terrorist attacks in Paris could be: Is it the mainstream media or some other source attempting to leave the impression that terrorists let the owners of confiscated cars to first retrieve their pets and don’t kill women.

Before we know it, we will be hearing that Islamist terrorists don’t kidnap, enslave, decapitate, crucify and bury their victims alive.

Meanwhile, less than one week after the Paris terrorist attacks, Minority Leader Nancy Pelosi is waving the jihadist flag over America, having announced—in a closed door meeting yesterday—she would name the first Muslim lawmaker to the House’s Permanent Select Committee on Intelligence.

“A senior Democratic aide said Rep. André Carson of Indiana would be named in the “coming days” to the key national security-focused panel. Pelosi (D-Calif.) told lawmakers of the appointment during the members’ weekly caucus meeting. (Politico, Jan 13, 15)

“Carson would be the first Muslim to serve on the committee and was the second Muslim to be elected to Congress. He already serves on the Armed Services Committee and worked for the Department of Homeland Security’s Fusion Center — the clearinghouse established by the federal government to streamline data sharing between the CIA, FBI, Department of Justice and the military.

“The intelligence committee will most likely tackle a series of high-profile international crises during the 114th Congress, including the threat of Islamic militants and Ukraine.”

Also less than a week after the Paris terrorist attacks, the chant “Je suis Charlie!” has already been submerged by “Stand up for the Prophet!”, debut of which will be heard and seen in a pro-Islamist rally scheduled this Saturday in Garland. Texas. (Pamela Geller).  In the meanwhile Obama and the Whitehouse keep insisting to us that Islam teaches peace.

Final question: Will all plebes forbidden from uttering the term “Islamist terrorism” now be told by their Western leader to “Hug a Terrorist”?

By Alan Caruba   The news of the day is former President Jimmy Carter, who placed the blame for the Paris...