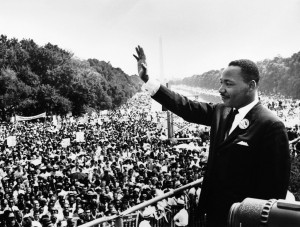 The late Martin Luther King Jr., and his “I have a dream” speech are being used in an effort to fight President Obama’s executive action to grant worker amnesty to millions of illegal immigrants.

“Was that Dr. King’s dream?” asks the ad produced by Californians for Population Stabilization and launched this week on national cable news networks leading up to Monday’s celebration of the late Dr. Martin Luther King, Jr.’s birthday.

The ad is the latest anti-Obama move by his critics of immigration reform and follows recent polls showing that African-Americans and other minorities worry that illegals are taking jobs, housing and healthcare they should get.

The announcer asks how Dr. King “would feel about 19 percent of African-Americans unemployed or underemployed? About giving amnesty and work permits to four million illegal aliens with so many Americans jobless? About admitting one million more immigrant workers in 2015 when 13 percent of Hispanic Americans are having trouble finding work? About Americans of all races not seeing a real wage increase in decades?”

It also notes that the unemployment rate among African-Americans is 19.2 percent, and 13.6 percent for Hispanics, way above the national average and that for whites.

The commercial concludes, “Was that Dr. King’s dream?”

He added, “the president’s policies are disproportionately harming the most vulnerable American workers who, more often than not, are minority Americans. Maybe the president and those in Congress pushing for more immigrant workers have lost sight of Dr. King’s dream?”

BY ROBERT SPENCER More self-censorship and voluntary acceptance of Sharia blasphemy laws. The President of the United States is now...