Austria has detained two teenage girls after they tried to travel to Syria to marry fighters from the Islamic State (ISIS), a spokesman for the prosecution was quoted by Reuters as having said Sunday. 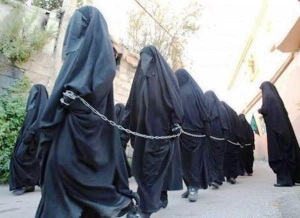 The girls, aged 16 and 17, had been sent back to Austria from Romania, where they were picked up by authorities on a train on December 30 as they tried to make their way to Syria to marry ISIS fighters there.

Around 170 people, many from Eastern Europe, have traveled to the Middle East from Austria to join Islamist militant groups, according to the Interior Ministry in Vienna.

The parents of the girls had handed over the phone of the 16-year-old to Austrian authorities when she went missing in December.

Data taken from a Russian chat application on the phone showed conversations about the girls’ plans, a spokesman for the prosecutors in Salzburg said.

The girls were detained in their homes in Salzburg and the province of Upper Austria after they returned from Romania.

The girls had Bosnian and Chechen family backgrounds, according to the Austrian APA news agency.

ISIS has been engaged in intensive recruiting targeting a western audience, and the attraction of Islamic jihad recently led 100 French girls and women to leave to join the group and serve as wives, concubines or babysitters as revealed earlier this month.

Most shockingly, several of those joining from France were shown to be Jewish girls who converted to Islam, including one who tried to blow up her parents’ store.

A similar case was seen in the United States, where in October three American teenage girls from a suburb of Denver were stopped in Germany on their way to join ISIS in Syria.

In an attempt to curtail the phenomenon of locals leaving the country to join ISIS, Austria in October introduced a law calling for standardized German-language translations of the Koran and moved to prohibit foreign funding of Muslim organizations on its soil, as it tries to tackle Islamic extremism.

In Germany, meanwhile, a ban on ISIS was announced, with the German government explaining it aimed to prevent the group from recruiting young jihadists in the country.

Three Israeli security guards who worked at the US consulate resigned in the wake of a plan to hire 35...