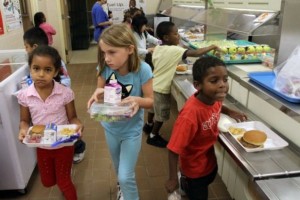 Should schools feed students dinner before they go home?

There’s a growing demand for schools to feed students dinner before they come home, according to the Associated Press.

Many low-income students are already provided with breakfast and lunch while they are at school. As part of the Healthy Hunger Free Kids Act—a law signed by President Obama in 2010—a pilot program was developed to provide free or low-price meals after school as well.

As of last year, about 1 million students across the country received dinner or an after-school snack before going home.

“When kids are hungry, they don’t pay attention,” Bennett Kayser, a school board member for the Los Angeles Unified School District, told the AP. “This is something that should have started years ago.”

Evelyn Ruballos, 10, noted that she “usually only eats crackers” after school. “And then I just go to sleep,” she said.

The demand for dinner exceeds those who are in need: Some busy families have expressed desire for their children to come home already fed, freeing up time after school for sports, homework or family activities.

Rachel Dunifon, a policy professor at Cornell University, told the AP that the meals might “help alleviate stress.”

“It could actually be good and open up more time for families,” she said.

Rachel Sheffield, a policy analyst for The Heritage Foundation’s DeVos Center for Religion and Civil Society, said that expanding a broken welfare system without first solving its problems is not an efficient way of helping those in need.

“Tragically, this welfare system has failed to truly help the poor achieve self-sufficiency. Rather than continuing to expand a broken system, policymakers need to work to reform it.”

Obama Has No Room in USA for Christian Refugees; Muslims Only

By Abraham H. Miller At the end of World War II, the Jewish survivors of Europe's Holocaust found that nearly...