Obama will not rest until he turns America into a third-world country. 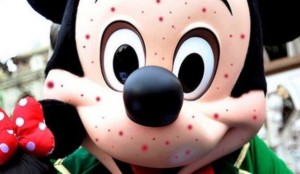 Several people have contracted measles after visiting Disneyland in California during the Holidays. Most were unvaccinated, and 2 were too young to be fully vaccinated.

The Philippines, which is experiencing a very large measles outbreak; at least 20,000 confirmed and suspected cases have been reported in the Asian nation.  Almost everyone in all of the Americas has been vaccinated against measles. The majority of cases come from Asia and sub Saharan Africa. The world know USA southern border is wide open, people from around the world have been using that loophole to enter the United States, including ISIS militants from the middle east.

People are coming in across the Southern border from all over the world, this could lead to the spread of measles, tuberculosis, hepatitis, swine flu, scabies, enterovirus etc.

It’s probable that the contamination began with a foreigner, or illegal immigrant, in all likelihood it did. Measles was no longer endemic in the US (thanks to vaccination) and is highly endemic in many developing countries because of a lack of availability of vaccines and other infrastructure to prevent infectious disease transmission.

People don’t realize that coming in illegally means bypassing the health screenings that foreigners receive when they come legally Obama and his radicals have put our nation in great danger.

Measles is one of the most contagious illnesses ever known. It is also one of the most fatal. Its thought Helen Keller had the measles or another illness when she was 2. It left her blind and deaf. One of the most devastating effects of red measles is the disabilities which follow.

The virus is highly contagious, can live for up to two hours on surfaces and is transmitted through an infected person’s coughs or sneezes. Measles is so contagious that “90% of the people close to that person who are not immune will also become infected”, according to the CDC.

Nearly uncontrolled immigration from third world countries has exacerbated the problem and most immigrants in the Southern California area whether legal or illegal come from third world areas and are not vaccinated. The disease is on the rise and the people who do not vaccinate endanger everyone.

What started as a outbreak among seven people who visited Disneyland  has spread to more than 56, as an unvaccinated woman apparently transmitted the virus through airports and the theme park, health officials said.

Health officials fear thousands may have been exposed to the measles at Disneyland and Disney California Adventure in the past months.

Many cases of measles in California  (the worst in 20 years) are being linked to unvaccinated CA residents.

Obama successfully brought in the Enterovirus D68 to the USA, and it has been ripping through our children’s health in 46 States, emerging after all of these illegal alien kids were welcomed into our country without a screening, no questions asked, and integrated into our school systems.  Is not the health of American children a concern?

Keep importing third world poverty and you’re bound to have more of the same. Between the diseased illegals and the dunderheads who refuse to vaccinate their children you’ve got a real witch’s brew going on.

Legal immigration equals screenings, which equals protecting the receiving population.  I think that is not a lot to ask.  The solution is simple.

Symptoms of measles include a fever of 101 degrees Fahrenheit or higher, cough, runny nose and a rash that spreads to cover the body. The rash usually occurs within two weeks of exposure.

Obama Has Two More Years Left to Destroy the U.S.

By Alan Caruba   As 2015 began the Journal Editorial Report on Fox News was devoted to having its reporters, some...