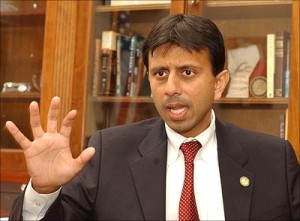 Louisiana Governor Bobby Jindal (R) said that he won’t “tiptoe around the truth” on radical Islam on Wednesday’s “Your World with Neil Cavuto” on the Fox News Channel.

Jindal reacted to comments made by a guest on MSNBC that he was “trying to scrub some of the brown off his skin.” Jindal said that it was “foolish” for MSNBC to give anyone who would make those comments a platform, but that he knew people on the left would “go crazy” when he “called out radical Islamic terrorism” and called for assimilation, and defended that there were “no-go zones” where police are less likely to go into, where women feel uncomfortable and where there are attempts to impose Sharia Law. He then declared “I think it’s embarrassing the president, somehow, for some reason, doesn’t want to use the word ‘terrorist’ to describe these individuals, doesn’t want to use the words ‘radical Islam.’… I think it’s time for the leaders to denounce the individuals, not just the acts of violence. I know the left wants us to tiptoe around the truth, I’m not going to do it. Part of the president’s job as the leader of our country, the leader of the free world, is to state clearly and honestly to us what are the challenges we face.”

“We’re at war with radical Islam whether he wants to call it that or not, that is exactly the conflict we face, I know the left’s not going to like it,” he continued. “But, Neil I’m also ready for us to stop calling ourselves hyphenated-Americans. Part of this assimilation…we need to stop calling ourselves African-Americans, Indian-Americans. My parents came over here 40 years ago, they wanted their kids to be Americans, they love India, they love our heritage, if they wanted us to be Indians, they would have stayed in India. We also need to be teaching our kids in civics, in our schools about American Exceptionalism. We need to insist on English as our language in this country. I have nothing against anybody who wants to come here to be an American, but if people don’t want to come here to integrate and assimilate, what they’re really trying to do is set up their own culture, their communities, what they’re really trying to do is overturn our culture. We need to recognize that threat, what that threat is to us. if we don’t, we’re going to see a replica of what’s happened in Europe in America. We’re going to see our own no-go zones, if we’re not serious about insisting on assimilation and integration.”

Regarding tax policy, he stated “this president wants to be all about redistribution. I think, in America, we look at federal taxes, we look at federal policies to promote opportunity and growth not redistribution like they do in Europe.” He added that he supported across-the-board tax cuts because “I think rates need to be lower,” although he did not say what he would ultimately lower them to.

Jindal also said “we need a Constitutional amendment saying the federal government shouldn’t grow faster than our economy, than our private sector economy so they don’t keep spending more while our paychecks aren’t growing.”

Obama’s “State of the Union”

On Tuesday, President Barack Obama gave his completely non-awaited State of the Union address. Fresh off a humiliating midterm shellacking,...