As hundreds of thousands of pro-life demonstrators participated in the March for Life in Washington, D.C., to protest abortion, President Obama threatened to veto a bill prohibiting federal funds from being used to pay for the controversial procedure. 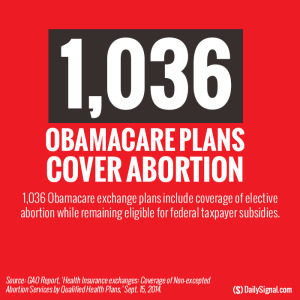 “I am deeply committed to protecting this core constitutional right, and I believe that efforts like H.R. 7, the bill the House considered today, would intrude on women’s reproductive freedom and access to health care and unnecessarily restrict the private insurance choices that consumers have today,” President Obama said in a statement objecting to the bill.

The House of Representatives passed the No Taxpayer Funding for Abortion Insurance Full Disclosure Act in a 242-179 vote today. (Roll call vote here.)

The legislation also bans the use of federal funds to pay for health insurance plans covering abortion. This provision includes the subsidies consumers receive through the Affordable Care Act.

Obama’s veto threat came as hundreds of thousands of pro-life protesters gathered blocks from the White House for the March for Life. Each year, students, families and churches gather in Washington, D.C., to rally against abortion. The March for Life began in response to the United States Supreme Court case Roe v. Wade and has grown over its 42-year history.

Both Democrats and Republicans participated in this year’s event and addressed attendees at a rally held before the march.

The president contended that the House-passed legislation infringed on a “woman’s freedom to make her own choices about her body and her health.”

“The federal government should not be injecting itself into decisions best made between women, their families and their doctors,” he said. “…Today, as we reflect on this critical moment in our history, may we all rededicate ourselves to ensuring that our daughters have the same rights, freedoms and opportunities as our sons.”

According to a Marist poll released today, 68 percent of Americans oppose the use of taxpayer dollars to fund abortion, which the House’s legislation seeks to stop.

“Really, the real extremists on the issue are the left, the pro-abortion lobby, [and] Barack Obama, himself, who have a radical agenda of abortion-on-demand, nine months, taxpayer-funded,” said @RepAlexMooney

“The majority of America supports our position on that,” Rep. Alex Mooney, R-W.V., told The Daily Signal. “Really, the real extremists on the issue are the left, the pro-abortion lobby, [and] Barack Obama himself, who have a radical agenda of abortion-on-demand, nine months, taxpayer-funded.”

The House’s decision to vote on the bill today deliberately coincided with the anniversary of Roe v. Wade and the March for Life. However, lawmakers originally planned to hold a vote on the Pain-Capable Unborn Child Protection Act, which bans abortion after 20 weeks of pregnancy.

Republican leadership abruptly dropped the bill after some lawmakers, led by Rep. Renee Ellmers of North Carolina and Jackie Walorski of Indiana, objected to the legislation’s exception provisions, which required women to report rape to the authorities in order to have an abortion after twenty weeks.

“It really should not be controversial,” Mooney said of the bill. “I’m disappointed we didn’t do it today, but I’m hopeful we’ll pass it in the near future.”

The president had threatened to veto the Pain-Capable Unborn Child Protection Act.

Yes, there are ‘no go’ zones in France

Recently, Fox News was shamed into apologizing for one of their anchors talking about "no go" zones in Europe, where...